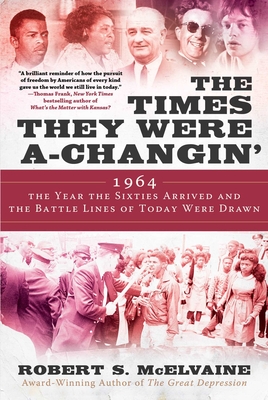 The Times They Were a-Changin'

1964, the Year the Sixties Arrived and the Battle Lines of Today Were Drawn

An award-winning historian on the transformative year in the sixties that continues to reverberate in our lives and politics—for readers of Heather Cox Richardson.

If 1968 marked a turning point in a pivotal decade, 1964—or rather, the long 1964, from JFK’s assassination in November 1963 to mid-1965—was the time when the sixties truly arrived. It was then that the United States began a radical shift toward a much more inclusive definition of “American,” with a greater degree of equality and a government actively involved in social and economic improvement.

It was a radical shift accompanied by a cultural revolution. The same month Bob Dylan released his iconic ballad “The Times They Are a-Changin’,” January 1964, President Lyndon Johnson announced his War on Poverty. Spurred by the civil rights movement and a generation pushing for change, the Civil Rights Act, the Voting Rights Act, and the Immigration and Nationality Act were passed during this period. This was a time of competing definitions of freedom. Freedom from racism, freedom from poverty. White youth sought freedoms they associated with black culture, captured imperfectly in the phrase “sex, drugs, and rock ’n’ roll.” Along with freedom from racist oppression, black Americans sought the opportunities associated with the white middle class: “white freedom.” Women challenged rigid gender roles. And in response to these freedoms, the changing mores, and youth culture, the contrary impulse found political expression in such figures as Barry Goldwater and Ronald Reagan, proponents of what was presented as freedom from government interference. Meanwhile, a nonevent in the Tonkin Gulf would accelerate the nation's plunge into the Vietnam tragedy.

In narrating 1964’s moment of reckoning, when American identity began to be reimagined, McElvaine ties those past battles to their legacy today. Throughout, he captures the changing consciousness of the period through its vibrant music, film, literature, and personalities.

Praise For The Times They Were a-Changin': 1964, the Year the Sixties Arrived and the Battle Lines of Today Were Drawn…

“The Times They Were a-Changin’ is a riveting book on the progressive advances that were achieved in 'the Long 1964.' McElvaine presents vivid details and unapologetic truths that can help to thwart rightwing radicals’ plans to annihilate the progress we have made toward equality. This eye-opening book makes clear the reasons society must study past mistakes to prevent them from reoccurring.”—Rep. Bennie G. Thompson, Chairman, House Select Committee to Investigate the January 6th Attack on U.S. Capitol

"In a lively, lucid, and fast-paced narrative, Robert McElvaine summons the past to illuminate today’s existential threats to democracy--and the resources that might help us surmount them. In the hands of this gifted storyteller, 1964 becomes a prism through which to see the present with fresh eyes, just in time to save the future."—Nancy MacLean, author of Democracy in Chains: The Deep History of the Radical Right’s Stealth Plan for America

“Sparkling with insights on every page, Robert McElvaine’s take on 1964 reminds us vividly of the days when the sixties were young and hopeful and liberation was something new and exciting. A brilliant reminder of how the pursuit of freedom by Americans of every kind gave us the world we still live in today.”—Thomas Frank, New York Times bestselling author of What’s the Matter with Kansas?

“1964 was a seminal year in modern American history, across culture and politics. In The Times They Were A-Changin', Bob McElvaine skillfully and compellingly tells the story, weaving into it important links to and observations on American history past and present. Let's hope the future represents the best and not the worst of that year's events and trends!”—Norman Ornstein, Emeritus Scholar, American Enterprise Institute

“Here is the book you must read to understand how the United States changed in the 1960s. In this beautifully written book, McElvaine combines political and cultural history with the skills of a master craftsman. There are fresh insights on nearly every page.”—Lloyd C. Gardner, Charles & Mary Beard Professor of History Emeritus, Rutgers University, author of Pay Any Price: Lyndon Johnson and the Wars for Vietnam

“The Times They Were a-Changin’ is a fascinating, highly readable reminder of that crucial period in the 1960s when American history permanently changed course.”—Clayborne Carson, Martin Luther King Jr. Centennial Professor of History Emeritus, Stanford University and  author of In Struggle: SNCC and the Black Awakening of the 1960s

“Robert McElvaine’s vivid new book takes us into the heart of the ’60s, to a year dominated by questions of freedom and justice, equality, and opportunity. The Times They Were a-Changin’ is a compelling, enlightening, sometimes heartbreaking reminder of what once was, what might have been, and what still could be, if only we’re willing to demand the best of our nation and ourselves.”—Kevin Boyle, William Smith Mason Professor of American History, Northwestern University,  and award-winning author of The Shattering: America in the 1960s

“The Times They Were A-Changin’ is a rich and revealing work of narrative history that takes a close look at pivotal cultural, political, and social movements that continue to have an impact today. Robert McElvaine carefully weaves together historic events and popular culture to tell a story not only about the beginning of ‘the sixties' but also the way that 1964 disrupted the strict conformity of the 1950s. This is a book not so much about the way we lived then as it is one that explains a great deal about the way we live now.”—W. Ralph Eubanks, author of A Place Like Mississippi and former director of publishing, Library of Congress

“With the consummate skill of a remarkably mature historian, Robert McElvaine looks at the year 1964, making the powerful case of just how crucial that year was for creating the period we call The Sixties and for creating issues that have passed down to the present moment.  McElvaine skillfully maneuvers between politics and popular culture, social movements and artistic trends, foreign policy and changing personal habits, sketches of individuals and sweeping historical panoramas. This book is just great!”—Alexander Bloom, author of Takin’ It to the Streets: A Sixties Reader and Long Time Gone: Sixties America Then and Now

“A highly original and deeply insightful analysis of events from 1964 and their direct connections to the present day's brutal political divisions. McElvaine's masterful, highly readable (and frequently humorous) interpretation of events solidly makes the connections between then and now. The Times They Were A-Changin' is a powerful reminder of the fragility of progress and the ever-present need to remain actively vigilant against primitive retrograde attempts to dehumanize those considered different.”—Lewis Perdue, author of Daughter of God

"McElvaine’s book will be enjoyable for readers who like popular history, and particularly for Baby Boomers feeling wistful about the past."—Library Journal

Robert S. McElvaine is the Elizabeth Chisholm Distinguished Professor of Arts & Letters and Professor of History at Millsaps College. He is the author of seven books, including The Great Depression: America, 1929–1941 and Eve’s Seed: Biology, the Sexes, and the Course of History, and is the editor of three. Among his many honors are the Richard Wright Award for Literary Excellence and the B. L. C. Wailes Award for national distinction in the field of history. He has served as historical consultant for several television programs, including the PBS series The Great Depression, and has written more than one hundred articles and opinion pieces in such national publications as the New York Times, Washington Post, Los Angeles Times, Wall Street Journal, the Nation, and Newsweek and has been a guest on about the same number of television and radio programs. He lives in Clinton, Mississippi.
Loading...
or support indie stores by buying on