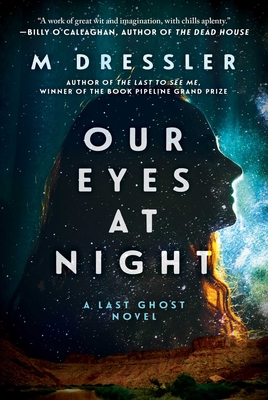 Our Eyes at Night

A spellbinding novel of the hunter and the hunted, defiance and survival, for fans of Jennifer McMahon and Simone St. James

In a climate-ravaged town in the remote Utah desert, a house remodels itself, a cemetery is rearranged, and an ancient valley is suddenly haunted by a glimmering visitor. Called in to "clean" the unwanted dead, ghost hunter Philip Pratt finds himself in territory at once familiar and unfamiliar, stalking the spirit of Emma Rose Finnis, a one-hundred-year-old phantom who has never let his own spirit rest.

Yet Emma has come to this blazing desert for her own reasons—to see just how far a ghost can go in a changing world. And if a living man bars her path, she must find a way through him, even if it means risking her heart and soul. Joined by other ghosts of the West, both old and new, she will make her stand for the unexpected chance at love and home, far from the cold ocean grave where she began.

A boldly imaginative tale of loss, hope, and danger by the award-winning author of the Last Ghost series, Our Eyes at Night is a journey through a stunning landscape of inescapable consequences, for both the living and the dead.

Praise For Our Eyes at Night: The Last Ghost Series, Book Three…

"Superior . . . Dressler’s solid prose and knack for creating sympathy for both major and minor characters make suspending disbelief easy. Series fans will find the denouement both surprising and moving. This entry is readily accessible to newcomers, who will be eager to seek out earlier installments."—Publishers Weekly

“In classic Dressler fashion, the latest Last Ghost story is totally engrossing, and overflowing with confounding questions about life and death.”—Booklist

“Our Eyes at Night is a work of great wit and imagination, with chills aplenty. Grab it if you see it; you won't be disappointed. M Dressler has a masterful grip on narrative and can write the lights out. I am new to her work but will be devouring her back catalogue in short order.”—Billy O'Callaghan, author of The Dead House

“Eerie and daring, a lyrically told tale of powerful and purposeful spirits that will leave you pondering what the dead might actually think of the living, and whether the wall between the two is ever as impermeable as we believe. ”—Elizabeth Crook, author of The Which Way Tree

“Combining the normalization of horror and surprising depths, Our Eyes at Night captures a world just beyond our reality, a world whose presence we fear not because it's scary but because it is so very familiar.”—Eric Barnes, author of The City Where We Once Lived

“Maybe we’ve all learned how to live with ghosts. We are aware now more than ever of how we occupy haunted spaces. Still, perhaps most of us haven’t learned to think of our ghosts as of us, as actually us—as this terrific novel suggests. Our Eyes at Night is a ghost story, yes.  More than that, it gives us a story about humanity: it is a tale of pursuit and an heroic journey; it is a novel about fear and politics, about race and class and gender, about loyalty and persistence and especially about love. It interrogates the nature not so much of death (though it does that) as of life and choice. Our Eyes at Night is full of wonder and humanity, and it is deeply, deeply satisfying.”—Katherine Coles, third Utah poet laureate and author of Look Both Ways

“The genius of Our Eyes at Night is the idea that ghosts endure their afterlives the way we endure our lives—longing above all for a place in the sun. And when that place is contested ground suffering from ecological crisis and the widening gap between those who have and those who don’t, then our souls rub, sometimes dangerously, against each other. This is a finely written and vividly felt tale of the hunted, not the hunter, and it’s a fresh and extraordinary take. Not to be missed.”—David Rocklin, author of The Luminist and The Night Language

"M Dressler continues to astound with her ability to write books that you can't put down—every chapter's ending grips your heart and won't let go until you turn the page—and that are about things that matter the most in our world right now: what is happening to our beloved planet, how do we continue to love and live when there is so much pain and so much to be afraid of . . . while reminding us that though we need and want love in our life, we don't need to settle for what makes us invisible to achieve it."—Diya Abdo, author of American Refuge

“What if everyone in the world already took it for granted that ghosts existed? And what if the ghosts were only a ‘problem’ because of the mindset of the living? M Dressler mines rich allegorical territory in her Last Ghost series [and] Our Eyes at Night.”—City Weekly (Salt Lake City)

"M Dressler explores what it means to live and love in a world where ghosts and the living interact with one another . . . balanc[ing] lyrical prose with a gripping ghost tale." —Moab Sun News

Praise for The Last to See Me, the Last Ghost Series Book 1
Book Pipeline 2017 Grand Prize Winner
Winner of the Audiofile Magazine 2018 Earphones Award for Fiction

“In this enjoyably claustrophobic novel set almost completely within Lambry House, Dressler reaches beyond the grave to consider the lengths that people go to in order to leave their mark behind.”—Publishers Weekly

M Dressler is the author of six novels, including The Last to See Me, book one in The Last Ghost Series, grand prize winner of the Book Pipeline Award and winner of Audiofile Magazine's Earphone Award for Fiction. Her stories and essays have appeared in the Kenyon Review, Creative Nonfiction, and Lit Hub, among others. Her honors include the North Carolina Artists Fellowship and the Paisano Fellowship in Literature, as well as residencies and fellowships from the Fulbright Commission, Hedgebrook, and the Carson McCullers Center. She is an emerita professor at Guilford College in North Carolina and lives and writes on the Oregon coast and in the high desert of southern Utah, birthplace of the ghosts in Our Eyes at Night.
Loading...
or support indie stores by buying on