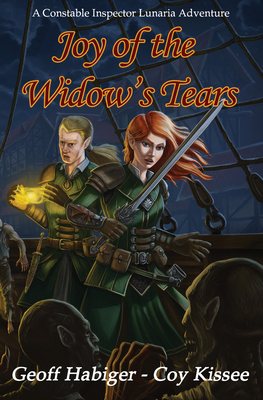 Reva and Ansee face fresh threats as a new evil is imported into Tenyl and threatens the city with an undead plague. Constable Inspector Reva Lunaria’s life is looking up. She’s managed to put two groups of unruly adventurers in jail and she gets word that her boyfriend, Aavril, has just arrived in port. She is looking forward to a relaxing dinner, a present, and maybe some time getting reacquainted after Aavril’s long absence. But Aavril’s ship has delivered more than a cargo of spices and exotic merchandise and a new evil begins to take root within Tenyl. Reva’s romantic evening is spoiled by news of a double murder. It should be a simple case, except that the victims have disappeared. Reva’s investigation barely gets started before Lord Constable Inspector Betulla contrives a way to get Reva suspended. With Reva temporarily off the force, the murder investigation is given to Constable Inspector Pflamtael, who is looking to find the fastest resolution to the case. Meanwhile, Seeker Ansee Carya investigates what appears to be a simple missing person case, until he discovers that the missing people – including the two murder victims – have become zombies. Now, Reva, with the aid of a halpbloed cleric, must work from outside the constabulary to figure out who is creating the undead, and how to stop the creatures before all of Tenyl becomes infected.

The writing duo of Geoff Habiger and Coy Kissee have been life-long friends since high school in Manhattan, Kansas. (Affectionately known as the Little Apple, which was a much better place to grow up than the Big Apple, in our humble opinion.) We love reading, baseball, cats, role-playing games, comics, and board games (not necessarily in that order and sometimes the cats can be very trying). We’ve spent many hours together over the years (and it’s been many years) basically geeking out and talking about our favorite books, authors, and movies, often discussing what we would do differently to fix a story or make a better script. We eventually turned this passion into something more than just talk and now write the stories that we want to read. Coy lives with his wife in Lenexa, Kansas. Geoff lives with his wife and son in Tijeras, New Mexico.
Loading...
or support indie stores by buying on