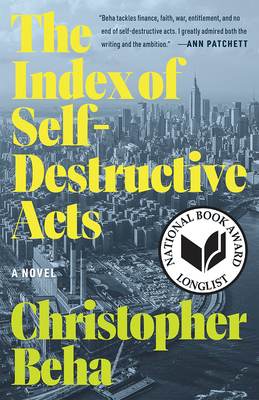 The Index of Self-Destructive Acts

“Beha tackles finance, faith, war, entitlement, and no end of self-destructive acts. I greatly admired both the writing and the ambition.” —Ann Patchett

Finalist for the Gotham Book Prize

A Best Book of the Year at Kirkus, The Christian Science Monitor, Library Journal, and BuzzFeed

What makes a life, Sam Waxworth sometimes wondered—self or circumstance?

On the day Sam Waxworth arrives in New York to write for the Interviewer, a street-corner preacher declares that the world is coming to an end. A data journalist and recent media celebrity—he correctly forecast every outcome of the 2008 election—Sam knows a few things about predicting the future. But when projection meets reality, life gets complicated.

His first assignment for the Interviewer is a profile of disgraced political columnist Frank Doyle, known to Sam for the sentimental works of baseball lore that first sparked his love of the game. When Sam meets Frank at Citi Field for the Mets’ home opener, he finds himself unexpectedly ushered into Doyle’s crumbling family empire. Kit, the matriarch, lost her investment bank to the financial crisis; Eddie, their son, hasn’t been the same since his second combat tour in Iraq; Eddie’s best friend from childhood, the fantastically successful hedge funder Justin Price, is starting to see cracks in his spotless public image. And then there’s Frank’s daughter, Margo, with whom Sam becomes involved—just as his wife, Lucy, arrives from Wisconsin. While their lives seem inextricable, none of them know how close they are to losing everything, including each other.

Sweeping in scope yet meticulous in its construction, The Index of Self-Destructive Acts is a remarkable family portrait and a masterful evocation of New York City and its institutions. Over the course of a single baseball season, Christopher Beha traces the passing of the torch from the old establishment to the new meritocracy, exploring how each generation’s failure helped land us where we are today. Whether or not the world is ending, Beha’s characters are all headed to apocalypses of their own making.

Praise For The Index of Self-Destructive Acts…

From politics to baseball to mortality and sexuality. . . . a work that gains momentum as it sweeps along, with an eloquent final page.
— Don DeLillo, Amazon Book Review

A satisfying, ambitious, absorbing novel about the ways big and small that we destroy ourselves.
— Roxane Gay

This is a big novel of big ideas. Beha tackles finance, faith, war, entitlement, and no end of self-destructive acts. I greatly admired both the writing and the ambition.
— Ann Patchett, Parnassus Books

A masterful interplay of big, fraught themes of privilege, race, wealth, and ethics.
— Buzzfeed, Best Books of the Year

A crafty plot and nimble sentences. . . . Just knowing it awaits you is almost as fun as reading it.
— Vulture

Beha does what only [Graham] Greene and a handful of other novelists have been able to accomplish: make God, belief, and doubt the stuff of serious fiction—even down to the probing dialogue of his characters.
— The Millions

Beha writes with persuasive authority, all the more impressive because he seems to do it without the slightest strain.
— National Review

A big, sympathetic book about the follies and failings of elite New Yorkers. . . . Beha creates a supple context in which to explore a series of intersecting efforts to find or regain footing and meaning in life.
— Financial Times

Beha’s marvelous new novel is about, and more often than not exemplifies, pretty much everything good that New York City has lost in the past few bad years: wit, liberalism, journalism, and the dignity of self-destruction.
— Joshua Cohen, author of Attention: Dispatches from a Land of Distraction

Beha is a sneaky-great plot-maker and thinker; by the time he wraps up this compassionate twenty-first-century tale of ambitious people looking for somewhere to place their faith—religion, statistics, love, money, country—you can see the clouds starting to gather into the moral Category 5 we’re currently enduring.
— Jonathan Dee, author of The Locals

Ranging effortlessly from baseball statistics to insider trading, and from street-corner prophecy to Romantic Poetry, Beha finds the nuance and humanity in every subject he takes up. The Index of Self-Destructive Acts is that increasingly rare thing: a big, ambitious novel that boldly explores contemporary life in all of its complexities and contradictions.

Christopher Beha’s seductive-complex The Index of Self-Destructive Acts operates like a minute repeater, tiny hammers hitting separate gongs, producing multiple distinct tones but, ultimately, telling one time. And the time that Beha is telling is one that we know, but we haven’t heard it told quite like this. Balancing multiple plots and characters with seamlessness and intrigue, The Index is bound to become a must-read of our time.

A book’s worth of thoughtful essays folded into a kick-ass novel.
— Nell Zink, author of Doxology

A significant novel, beautifully crafted and deeply felt. Beha creates a high bonfire of our era’s vanities. His work reminds me of the great Robert Stone and Theodore Dreiser. This is a novel to savour.
— Colum McCann, author of Apeirogon

Christopher Beha is the editor of Harper’s Magazine. He is the author of two previous novels, What Happened to Sophie Wilder and Arts & Entertainments, and a memoir, The Whole Five Feet. His writing has appeared in the New York Review of Books, the New York Times, and the London Review of Books. He lives in New York City with his wife and family.
Loading...
or support indie stores by buying on