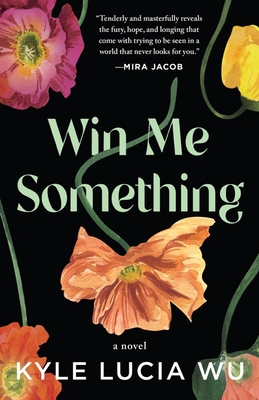 “Such a thoughtful, gentle, totally immersive debut about a universally fascinating profession: nannying for the super-rich. Willa’s yearning to belong and find her footing in a world that frequently misunderstands and typecasts her reads as tender and true.”
— Kristen Iskandrian, Thank You Books, Birmingham, AL
View the List

A perceptive and powerful debut of identity and belonging—of a young woman determined to be seen.

Willa Chen has never quite fit in. Growing up as a biracial Chinese American girl in New Jersey, Willa felt both hypervisible and unseen, too Asian to fit in at her mostly white school, and too white to speak to the few Asian kids around. After her parents’ early divorce, they both remarried and started new families, and Willa grew up feeling outside of their new lives, too.

For years, Willa does her best to stifle her feelings of loneliness, drifting through high school and then college as she tries to quiet the unease inside her. But when she begins working for the Adriens—a wealthy white family in Tribeca—as a nanny for their daughter, Bijou, Willa is confronted with all of the things she never had. As she draws closer to the family and eventually moves in with them, Willa finds herself questioning who she is, and revisiting a childhood where she never felt fully at home. Self-examining and fraught with the emotions of a family who fails and loves in equal measure, Win Me Something is a nuanced coming-of-age debut about the irreparable fissures between people, and a young woman who asks what it really means to belong, and how she might begin to define her own life.


Praise For Win Me Something…

A lovely coming-of-age story that will resonate with anyone who’s felt separate, or questioned where they belong.
— The Washington Post

Wu understands the human heart keenly, and her novel is a subtle but powerful triumph.
— NPR Books

A poignant, impressive debut that should herald the rise of a literary force to be reckoned with.
— Shondaland

Tender and devastating.
— The Atlantic

Come to read about a live-in nanny deal with the antics of a rich family in Tribeca, stay for the nuanced exploration of identity.
— NYLON

A story about growing up and finding your place in the world—or creating one of your own.
— Good Housekeeping

I’ve never read a novel quite like Win Me Something, which is to say that I’ve never seen the nuances of navigating a biracial identity put, so beautifully, in fiction. . . . Readers will recognize themselves in Willa’s loneliness, and they will feel that they are, finally, in good company.

A great book that will spark lots of discussions about family, identity, and how we see ourselves.
— Book Riot

Tender, melancholic, self-reflexive, and quietly poignant. In other words, it feels like growing up.
— Necessary Fiction

Feels like listening to a friend tell you about her life straightforward and true. . . . thoughtful and moving.
— ZYZZYVA

[A] poignantly executed. . . . exploration of kinship of all stripes.
— Departures

This poignant debut is about identity, acceptance and complicated family dynamics.
— PureWow

A powerhouse debut, this nuanced coming-of-age story is for anyone who has felt hypervisible and invisible, inside and outside, seen and unseen.
— Ms. Magazine

Willa’s story—and figuring out her sense of self—truly leaps off the page.
— Alma

Readers looking for a taste of the millennial psyche but perhaps intimidated by the hype around Sally Rooney will want to check out Win Me Something by debut novelist Kyle Lucia Wu. . . . this tale of Willa, a young biracial woman, will resonate with a lot of younger people.

A soul-searching journey to be heard, and to belong.
— West Trade Review

Wu’s writing is pitch perfect from start to finish. The introspective and subtle plot floats off the page.
— Debutiful

A subtly rendered and satisfying story of someone on the verge of beginning to know herself.
— BookBrowse

Impressive. . . . expect subtle surprises as Willa’s relationships evolve in a satisfying accumulation of carefully drawn small moments that build toward her understanding, even acceptance, of both an imperfect world and herself.
— Kirkus, Starred Review

Wu’s compassionate debut traces one woman’s search for belonging. . . . Wu brilliantly lays out the complicated dynamics of love, belonging, and care that exist within all relationships.
— Publishers Weekly

A wistful novel about how much effort it can take to find and settle into your place in the world.
— Foreword Reviews

Masterfully reveals the fury, hope, and longing that come with trying to be seen in a world that never looks for you.
— Mira Jacob, author of Good Talk

Win Me Something is an observant, contemplative story about the complex reality of growing up with a mixed identity in two starkly different mixed families. Kyle Lucia Wu deftly weaves back and forth between Willa’s teenaged years and her adult life to explore loneliness, uncertainty, and a singular, persistent question—where do I truly belong?

— Crystal Hana Kim, author of If You Leave Me

Kyle Lucia Wu’s Win Me Something is groundbreaking in its exploration of blended families and a biracial Asian American consciousness. In subtle but strikingly observed scenes that depict race, class, and lives of having and not having, she explores the secret want that we all have: to belong to something, somewhere. Here we find Willa, a biracial Chinese American narrator seeking to understand where she belongs in the family of things. Here is a prose writer who relishes in the poetry of language. Under Wu’s deft hand, each sentence unfolds like a miracle.

Taut, engrossing, and masterfully observed, Win Me Something announces a powerful and luminescent new literary voice in Kyle Lucia Wu.

— Alexandra Kleeman, author of You Too Can Have a Body Like Mine

Like a latter-day Willa Cather, after whom her protagonist is named, Kyle Lucia Wu has written a beautiful novel about a fiercely American young woman whose Americanness is constantly questioned by those around her. This is a sad, funny, and tender coming-of-age story about what family and belonging means for someone who is realizing that she is constantly watched but not truly seen.
— David Burr Gerrard, author of The Epiphany Machine

A subtle, wise debut. . . . Win Me Something is a nuanced story of longing, of the paired desires to belong and to strike one’s own path. Willa is a quiet heroine, but unforgettable.

Kyle Lucia Wu has received the Asian American Writers’ Workshop Margins Fellowship and residencies from The Millay Colony, The Byrdcliffe Colony, Plympton’s Writing Downtown Residency, and the Kimmel Harding Nelson Center. She is the Programs & Communications Director at Kundiman and has taught creative writing at Fordham University and The New School. She was born in New Jersey and lives in Los Angeles.
Loading...
or support indie stores by buying on