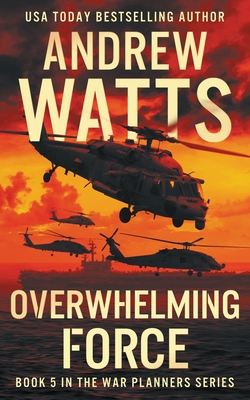 When the Chinese military launches a surprise attack on the United States, the world is thrown into chaos.

The Manning family is spread out over the globe, each doing their part to defend America.

But President Cheng Jinshan and his deadly operative Lena Chou have set their plans in motion. A gargantuan Chinese fleet, with new cutting-edge technology, is making its way towards the American forces. And as the two superpowers collide, it will take skill, courage, and cunning to win the day.

★★★★★ "Tom Clancy set the bar for warfare with Red Storm Rising in 1986. Today, a new bar has been set for a new generation. Readers of Book 5 should plan on setting aside a few hours, silence their cell phones, put out a do not disturb sign and read from cover to cover."

OVERWHELMING FORCE is the fifth book in The War Planners Series, by USA TODAY bestselling author and former US Navy pilot Andrew Watts.