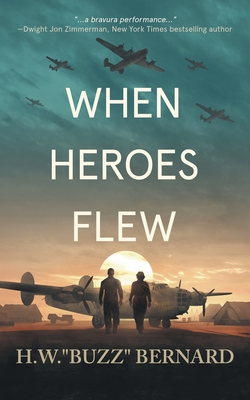 A novel of extraordinary bravery, inspired by the true story of one of the most harrowing air raids ever flown. Fans of Beneath A Scarlet Sky, The Nightingale, and Unbroken will enjoy this unforgettable tale of duty, honor, and compassion.

For B-24 bomber pilot Al Lycoming, the mission was history in the making. For Women's Airforce Service Pilot Vivian Wright, it was a chance to put her skills to the ultimate test...and share in the burden of combat.

Dispatched to Benghazi on mysterious orders, Al Lycoming finds nearly 200 other B-24 bombers being assembled...and a top secret assignment that will catapult them all into seemingly impenetrable Nazi defenses.

But when his co-pilot falls ill at the last moment, Al secretly finds help from an unlikely source--Vivian.

Together, the two fly towards dark skies filled with enemy flak and fighters...and into the pages of history.

With perspectives from American and German pilots alike, When Heroes Flew masterfully weaves together one of the most dangerous and incredible aerial operations of World War Two with a riveting tale of bravery, suspense, and self-sacrifice.

"This book gripped me from the very first page...In real life, this WW2 mission resulted in the award of Five Medals of Honor. In my view, they all deserved one. Highly recommended." --Rachel Wesson, author of The Orphan Train series

"...chuckle and weep in tandem while forgetting everything around you but the story itself." --Kathleen M. Rodgers, author of The Flying Cutterbucks

" The pilot's]...amazing courage, and that of the entire group, is subtly drawn." --John J. Gobbell, author of the Todd Ingram series

"Strap in It's one hell of a ride " --Don Keith, author of Final Bearing