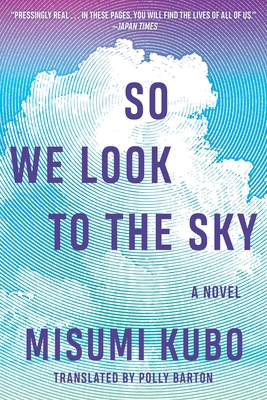 So We Look to the Sky

This shocking, boisterous novel was a runaway bestseller and award winner in Japan: “Pressingly real . . . In these pages, you will find the lives of all of us” (Japan Times).

Searingly honest and sexually explicit, So We Look to the Sky is a novel told in five linked stories that begin with an affair between a student and a woman ten years his senior, who picks him up for cosplay sex in a comics market. Their scandalous liaison, which the woman's husband makes public by posting secretly taped video online, frames all of the stories, but each explores a different aspect of the life passages and hardships ordinary people face. A teenager experimenting with sex and then, perhaps, experiencing love and loss; a young, anime-obsessed wife bullied by her mother-in-law to produce the child she and her husband cannot conceive; a high school girl, spurned by the student, realizing that being cute and fertile is all others expect of her; the student's best friend, who lives in the projects and is left alone to support and care for his voracious, senile grandmother; and the student's mother, a divorced single parent and midwife, who guides women bringing new life into this world and must rescue her son, crushed by the twin blows of public humiliation and loss, from giving up on his own.

Narrating each story in the distinctive voice of its protagonist, Misumi Kubo weaves themes including sex, love, the female body, gossip, and the bullying that leaves young people feeling burdened and helpless into a profoundly original novel that lingers in the mind for its affirmation of the raw, unquellable force of life.


Praise For So We Look to the Sky: A Novel…

"So We Look to the Sky arrives on American shores this month with a glittering translation from Polly Barton. Building on the wave of such recent hits as Convenience Store Woman and Breasts and Eggs, Misumi Kobo paints a prismatic and unflinching portrait of modern life, grappling with knotty issues of fertility, childbirth, abuse, poverty, and illness with an effervescent touch that never feels forced.”—Chicago Review of Books, “12 Must-Read Books of August”

“Compulsively readable. These characters become as real as one's neighbors, and the issues they contend with are also one's own: gossip, abuse, dementia, childbirth, menopause. . . . And woven through it all, an authorial voice both mind-bending and blindingly bright, producing utterances of self-understanding so clear they shoot right through her narrators with a sense of the almost magical.”—Katherine Forbes Riley, award-winning author of The Bobcat: A Novel

“The intertwining stories in Misumi Kubo's utterly original and enthralling novel take an unflinching look at the messy physicality of human experience. So We Look to the Sky offers a tender, troubling, and ultimately inspiring vision of the ways our lives are connected even as our struggles are our own.”—Jean Hegland, author of Into the Forest and Still Time

“Pressingly real . . . Alive with a sense of understanding of the way things really work out there in the world. One senses a message lurking within these pages that, if Japanese society wants to heal its wounds and head in a less dysfunctional direction, it needs is to reevaluate what life really means through a deeper grasp of sex. . . . In these pages you will find the lives of all of us.”—Japan Times / Shukan Asahi

“A searing and prismatic portrait of the relentless pressures of ordinary life in modern Japan.”—PEN/Heim grant awards committee

“Painting an intricate portrait of women, family, love, and friendship, So We Look to the Sky questions the nature of sexuality and indeed life itself. . . . Anzu’s feelings as she undergoes fertility treatment, depictions of birth spilling over with life force, and the sex scenes are all written with the same passion.”—Niigata Nippō

“Addressing matters as diverse as desire, infertility, bullying, reclusion, poverty, dementia care, and infidelity, the plot's twists and turns range widely, to be sure. And yet, despite the surfeit of action, the narrative never feels forced. Rather, there’s a cool assurance to the prose. Instead of journalistic excess, the book relays with great realism the wails, pangs, and sighs of those whom life’s trials and tribulations have left feeling helpless and burdened.”—Fujin Kōron

“There are no easy solutions in these stories, but they nonetheless instill in their reader a belief in the power of life.”—Nihon Keizai Shimbun

"Wonderful . . . Has both the sensuous power and the humor of a dream. . . . . Reminiscent of Han Kang's The Vegetarian."—Naomi Alderman, bestselling author of The Power, on "Mikumari," the short story that became chapter 1 of So We Look to the Sky

“At the heart of this story is a huge affirmation of birth and living. It’s what makes it such a joy to read.”—Author Kiyoshi Shigematsu, member of the jury for the R-18 Prize ("Stories for Women by Women") awarded to "Mikumari"

Misumi Kubo withdrew from junior college and worked for an advertising company before turning freelance as a writer and editor. She is the author of seven novels. She won the R-18 Literature Prize in 2009 for the short story that became the first chapter of So We Look to the Sky, her debut novel, which won the Yamamoto Shūgorō Prize, placed second in the voting for the Japan Booksellers' Award, and was a runaway bestseller. Her next novel, Stray Whale on a Sunny Day, won the Futaro Yamada Prize, and in 2018, Staring at Our Hands was shortlisted for the Naoki Prize. She lives in Japan.
Loading...
or support indie stores by buying on