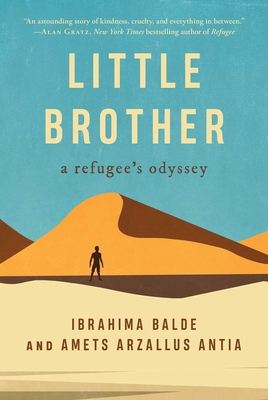 Based on the author's own life, this heartbreaking novel about an African migrant takes you inside the refugee crisis—for readers of The Lost Children's Archive and The Girl with the Louding Voice.

Ibrahima is still a boy when his father dies, but as the eldest son he must leave their home village in the Guinean countryside in search of work to support his family. Eventually apprenticed to a trucker in the capital, he learns that his younger brother has dropped out of school and fled to Libya to pursue the dream of finding work in Europe. Leaving behind everything, Ibrahima sets off with the aim to convince his little brother to return home and complete his education.

His journey, full of hardships and sometimes on foot, takes Ibrahima north to Mali and across the Sahara Desert to the refugee camps of North Africa—to Algeria, Libya, and then back west to Morocco. Stopping along the way to recover physically or earn money, he encounters untold cruelties as well as kindness. His savings are taken at gunpoint. In the desert, he is held in a prison that serves as a slave market. In Libya, imprisoned again, he is sold to a chicken farmer but escapes for the second time. Only then, in a camp in Algeria, does he learn that his brother may have drowned attempting to cross the Mediterranean. Grief-stricken, burdened by guilt, and unable to face his mother, he too arranges passage across the sea in a Zodiac.

The author, Ibrahima Balde, was rescued at sea and found refuge in the Basque Country of Spain. Based on his true-life story told to a traditional bard from the Basque Country and retold here, Little Brother is a deeply moving, eye-opening novel that gives voice and a face to the refugee crisis, illuminating the plight of migrants from many lands.

"Who among us could have walked half so far, survived half so many perils, as Ibrahima Balde? Told with innocence and honesty, his is an astounding story of kindness, cruelty, and everything in between."—Alan Gratz, New York Times bestselling author of Refugee

"A deeply moving novel that reminds us of the power of perseverance and love in the face of violent borders. This is an important book."—Reece Jones, author of White Borders: The History of Race and Immigration in the United States from Chinese Exclusion to the Border Wall

“A breathtaking and eye-opening account in the best tradition of storytelling, where a true story is told simply and without embellishment,for Balde's painful journey needs none. Along the way, we are brought into a world where, despite unimaginable cruelty and violence, compassion is found in the slightest of places and where people who have so little to give always find a way to do so. Above all, perhaps, it is an incredible story of dedication, loyalty, and one boy's determination to do the right thing, despite all odds.”—Mark R. Thornton, author of Kid Moses

"The charm of this wonderful book is both in the simplicity and the innocence of the storytelling. Ibrahima’s quest is at times heartbreaking, at times amusing, but steadfastly fascinating and admirable. His stream-of-consciousness delivery, with no detail too small to omit, will captivate readers and keep them turning the pages. This inspirational novel should be mandatory reading at every school in the country."—Robin Yocum, award-winning author of The Essay

"Balde does an impressive amount with remarkably few words, words that put us on Balde’s shoulder as he walks all those miles to look for his little brother. Readers who love reading inspirational stories or tales of hardship will enjoy this one."—A Bookish Type

Ibrahima Balde is a migrant from the Republic of Guinea who crossed the Sahara Desert to North Africa in search of his younger brother. After entering the European Union without papers, he made his way to Basque Country, where, while living in a homeless shelter in Irun, he met Amets Arzallus. Ibrahima has applied for asylum and now lives in a Red Cross hostel in Madrid.

Amets Arzallus Antia, a child of refugees, is a well-known Basque versolari, or improvisational poet, who works with an organization that supports migrants in the Basque Country.

Timberlake Wertenbaker is an award-winning British playwright who grew up in Basque Country.
Loading...
or support indie stores by buying on