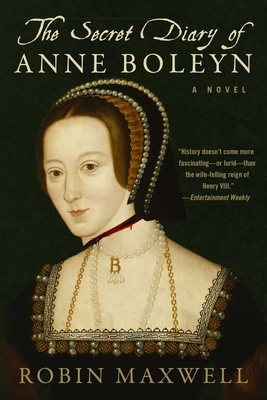 The Secret Diary of Anne Boleyn

One was queen for a thousand days; one for over forty years. Both were passionate, headstrong women, loved and hated by Henry VIII. Yet until the discovery of the secret diary, Anne Boleyn and her daughter, Elizabeth I, had never really met.

Anne was the second of Henry's six wives, doomed to be beloved, betrayed, and beheaded. When Henry fell madly in love with her upon her return from an education at the lascivious French court, he was already a married man. While his passion for Anne was great enough to rock the foundation of England and of all Christendom, in the end he forsook her for another love, schemed against her, and ultimately had her sentenced to death. But unbeknownst to the king, Anne had kept a diary.

At the beginning of Elizabeth 's reign, it is pressed into her hands.  In reading it, the young queen discovers a great deal about her much-maligned mother: Anne's fierce determination, her hard-won knowledge about being a woman in a world ruled by despotic men, and her deep-seated love for the infant daughter taken from her shortly after her birth.

In the journal's pages, Elizabeth finds an echo of her own dramatic life as a passionate young woman at the center of England's powerful male establishment, and with the knowledge gained from them, makes a resolution that will change the course of history.

Praise For The Secret Diary of Anne Boleyn: A Novel…

“A wonderfully juicy historical novel so convincing that it’s difficult to believe it is the author’s first . . . Maxwell brings all of bloody Tudor England vividly to life.”—Publishers Weekly, starred review

“Long before there was Philippa Gregory, there was Robin Maxwell, whose novel The Secret Diary of Anne Boleyn changed the way readers perceived Henry VIII’s second wife. In this dramatic retelling of Anne’s life, Maxwell creates an historical fiction classic. But beware: this is truly addictive reading.”—Michelle Moran, author of Nefertiti and Madame Tussaud

"Vivid and immediate, penned in the queen's own words, The Secret Diary of Anne Boleyn intertwines Anne's tumultuous rise and fall with the early reign of her daughter, as Elizabeth struggles to assert her power. With a unique gift for bringing the past to life, Robin Maxwell catapults us into the hearts and minds of two women bound by blood and fate in the perilous intrigues of the Tudor court. The result is dazzling, historical fiction at its finest."—C. W. Gortner, author of Mademoiselle Chanel and The Last Queen

"The Secret Diary of Anne Boleyn was the first Anne Boleyn novel I read and it captivated me. I’m hard to please when it comes to Anne Boleyn and Elizabeth I, but Maxwell brought these women and their stories to life beautifully. It’s a book to keep and read again. A delight.”
—Claire Ridgway TheAnneBoleynFiles.com

“Energetic . . . should appeal to all fanciers to imagined portraits of Tudor-era heroines, like the late Elizabeth Hibbert’s (aka Victoria Holt, Philippa Carr, Jean Plaidy) gallery of royal queens.”—Kirkus Reviews

"Maxwell knows her stuff. . . . In her treatment of Tudor's greatest tragedy, Robin Maxwell has gone where no man has gone before."—Saria Kraft, Malibu Times

"A novel with depth, character, and a compelling plot."—Rose-Marie Donovan, Delray Times

Robin Maxwell began writing novels about the historical figures she had been obsessing about since graduating from Tufts University with a degree in Occupational Therapy. The Secret Diary of Anne Boleyn,  her bestselling debut and the first novel in her Elizabethan Quartet, won two YA awards and has been translated into fourteen languages. It was followed by The Queen's Bastard and The Virgin Elizabeth, which was an Los Angeles Times bestseller. The Wild Irish—an epic tale of Ireland's rebel queen, Grace O'Malley—closed out her Elizabethan Quartet and is now in development for a television series. Signora Da Vinci and Jane: The Woman Who Loved Tarzan are tales of the remarkable women behind two of the world's most beloved wildmen, Maestro Leonardo and Lord Greystoke. Robin lives with her husband of forty years, yogi Max Thomas, at High Desert Eden, a wildlife sanctuary in the Mojave Desert.
Loading...
or support indie stores by buying on