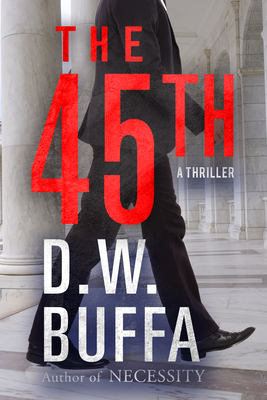 What if a political party in disarray turned to a man to lead them with no political background? What if a country torn apart by ideology turned to a man whose charisma belied a complete lack of governing experience? What if a country elected a President based not on qualifications, but on hope? Would this man lead the country into a new era of fortune and prosperity? Or would he lead them into total and complete chaos? D.W. Buffa has proven himself as one of the absolute best political writers working today, and in THE 45TH he creates a work of compelling fiction that's as timely as this morning's news. THE 45TH will leave you breathless, enraged, and unable to forget it once the last page is turned.

D.W. Buffa was born in San Francisco and raised in the Bay Area. After graduation from Michigan State University, he studied under Leo Strauss, Joseph Cropsey and Hans J. Morgenthau at the University of Chicago where he earned both an M.A. and a Ph. D. in political science. He received his J.D. degree from Wayne State University in Detroit. Buffa was a criminal defense attorney for 10 years and his seven Joseph Antonelli novels reflect that experience. The New York Times called The Defense 'an accomplished first novel' which 'leaves you wanting to go back to the beginning and read it over again.' The Judgment was nominated for the Edgar Award for best novel of the year. D.W. Buffa lives in Northern California. You can visit his Official Website at dwbuffa.net.
Loading...
or support indie stores by buying on