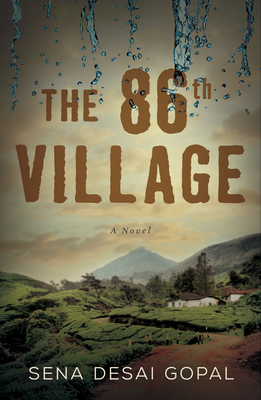 One of the Most Anticipated Crime Fiction of 2022 by CrimeReads

Throughout Southern India, eighty-six villages are set to completely submerge due to a government-sanctioned dam across the Krishna river. Nilgi, one such village on the banks of the mighty River Krishna, has so far escaped unscathed from the illegal iron-ore mining and floods that have ravaged the rest of the district for decades. The village believes itself to be indestructible and incorruptible despite warnings of impending doom. With whole mountains disappearing from the mining around Nilgi over time, the threat of a big flood submerging the entire village is imminent.

One night, Reshma, a young orphan girl appears in the village, alone and without any possessions. The villagers, not knowing what else to do, take her to Raj Nayak--the patriarch of the leading family in the village who has been organizing and leading anti-dam movements. For several years he's been lobbying the corrupt government for fair compensation to be paid to the people who will lose their livelihoods and property to the mines and the flood. But Reshma's presence, and the mystery of her origins, sets off a chain of events threatening the protests, the family, and Nilgi itself. Soon, secrets and corruption flood the village along with the waters.

In this poignant and beautiful debut, the reader discovers the damage--both to people and the environment--wrought by human hubris and greed, and asks whether it is ever too late to right a wrong?

Sena Desai Gopal is a journalist specializing in science and medicine, food, and travel. She was born and raised in India and now lives in Boston with her husband and two children. Her work has been published in The Boston Globe, The Atlantic, Modern Farmer, and The Times of India, among others. She holds master's degrees in Environmental Science from India, Tropical Agricultural and Environmental Science from England, and Science and Medical Journalism from the United States. Sena herself is from a small village in southern India, doomed to submerge in the backwaters of one of India's biggest dam projects - The Upper Krishna Project. Her family has lived in the village for 18 generations and she grew up on stories of its residents and a fair dose of dam politics. Her father was one of the people who fought for and forced the government to fairly compensate the people who will lose their livelihoods and property because of the dam. Sena can be found at www.senadesaigopal.com and on Twitter at @senadesaigopal
Loading...
or support indie stores by buying on