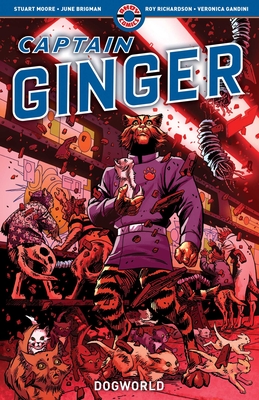 The acclaimed saga of cats in space returns for a devastating second series!

Captain Ginger and his feline crew embark on a vast, six-issue adventure when they follow a mysterious hyperspace signal to the home of their unknown canine “cousins.” But trouble aboard ship may doom them before they even meet the dogs.

Moore wins over the series’ new and returning fans with the complex relationships of the good captain’s crew… Beautifully drawn by Brigman, fast-paced, and compelling as hell, this is one comic fans should add to their want list…It’s purr-fectly good reading!

This intergalactic feline space story is both action-packed and full of humor.
— Albany Times-Union

Stuart is writing one hell of a story… I am happy to be here for the duration of the ride.
— Reading with a Flight Ring

June Brigman has enjoyed a long and varied career as a cartoonist, drawing such comic book titles as Alpha Flight, Supergirl, and Star Wars. She is the co-creator (with Louise Simonson) of the Power Pack series from Marvel Comics, which recently celebrated its 30th anniversary. Assisted by her husband inker/colorist Roy Richardson, she illustrated the Brenda Starr comic strip for 15 years, and has drawn many educational comics, as well as doing freelance illustrations for Horse & Rider magazine. The pair have recently taken over the artistic reins of the long-running “Mary Worth” comic strip. June teaches part time in the Sequential Art Dept. at the Savannah College of Art and Design, Atlanta branch. Her online portfolio can be seen at www.ArtWanted.com/juneart.

Roy Richardson was inspired to pursue a comics career by the work of Jack Kirby, the ground breaking Fourth World series in particular. He has worked for all the major publishers, on such books as Captain America, Iron Man, the Flash, Star Wars, and his own co-creation, The Tomorrow Knights, which has been adapted into a roleplaying game from ZMan Games. He also worked for 15 years in collaboration with his wife, June Brigman, inking, lettering and coloring the Brenda Starr comic strip. The pair have recently taken over the artistic reins of the long-running Mary Worth. Roy is also hard at work on his first book of short stories, entitled Hillbillies Prefer Blondes, tales of growing up in the South in the 1970's. His online portfolio can be seen at www.ArtWanted.com/royart.
Loading...
or
Not Currently Available for Direct Purchase