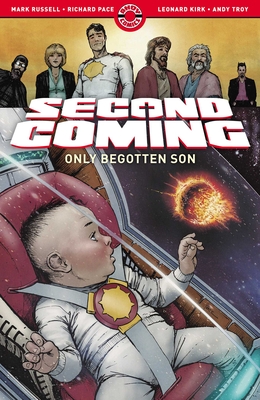 In the eagerly awaited second volume of SECOND COMING, superhero Sunstar and his housemate, Jesus Christ, must deal with Sunstar’s growing family and the distortion of Jesus’s message on Earth.

The long-awaited second volume of the book ComicsBeat called “the world’s most dangerous comic book and the most lovely.” As superhero Sunstar anticipates becoming a father, he agonizes over how—and if—he can use his powers to make a better world for his child. And as Jesus Christ loses his bedroom to a nursery, he struggles to find a new place in a society that distorts and exploits his message for profit.

“A surprisingly subtle and sensitive exploration of faith, hero worship, and the way both exist in today’s popular culture — all wrapped up in a mixed-match buddy comedy that also featured one of the most unexpected depictions of God one could imagine.”
— Graeme McMillan

“Second Coming is one of the most exciting commentaries on superheroes in some time and when you throw in Jesus Christ it gets even more compelling. Second Coming: Only Begotten Son offers a lot to dig into for the superhero crowd and continues to show Mark Russell and Richard Pace are at the top of their game.”
— David Brooke

Richard Pace resides in Toronto, Canada, looking down upon the silly Americans to the south. From this perch, he has deployed his illustration skills on titles for Vertigo and Marvel and has also co-written Dale Keown’s Pitt and Batman: The Doom That Came to Gotham.

Leonard Kirk began his comic book career with Malibu Comics. He has drawn numerous titles for Marvel and DC, including Fantastic Four, Star Wars and extended collaborations with Peter David on Supergirl and X-Factor. He, wisely, lives north of the border and recently drew a revival of the Canadian comics icon Captain Canuck and a return to the post-apocalyptic world of Marvel Zombies.
Loading...
or
Not Currently Available for Direct Purchase