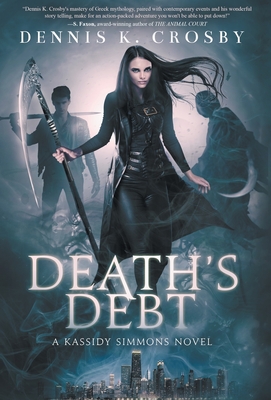 Kassidy Simmons dispatched the Angel of Death, secured the Scythe of Cronus, and claimed her birthright. As she navigates her new role and tracks down rogue Wraiths still loyal to Azra-El, an unknown force is plotting to make an ancient prophecy foretelling the end of the world a reality.

Seven hundred years ago, Jaxon Burke awoke in a field outside of Rome, with no memory of his former life. Now a present-day killer for hire, the immortal assassin has taken countless lives, and, because of the recent shake-up in the natural order, the memories of those deaths are fueling his nightmares-nightmares that feel real. He longs for relief. He longs for peace.

He longs for death.

A recent brush with the hereafter brings him to the attention of Solomon Steele, a Wraith angered by Kassidy's recent ascension. With the promise of death as his reward, Jaxon agrees to help Steele destroy Kassidy-but he is ill-prepared for the repercussions of this strange world he is now in.

As the truth of Jaxon's life comes to light, Kassidy must find a way to pay for the sins of the past and stop this deadly duo from destroying her, taking the Scythe of Cronus, and ushering in the apocalypse.