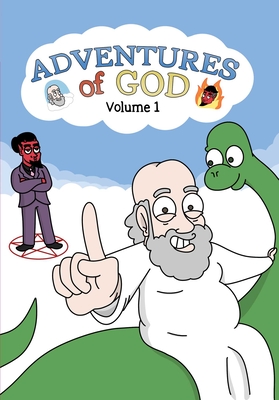 A lot of God’s most bizarre decisions throughout history make a lot more sense once you realise he’s just a bumbling old man with poor long term
memory and a drinking problem. In this book you will learn why He got rid of dinosaurs, why it took Him so long to talk Abraham out of killing his son, and all about His complicated relationship with Satan.

This volume contains the first 50 episodes of the popular Ringo Award nominated webcomic!

Legal disclaimer: you might go to Hell for laughing, we decline all liability.

Created by the team of Matteo Ferrazzi and Corey Jay. Adventures of God is a critically acclaimed ongoing webcomic which earned a Ringo nomination for Best Humor. For the first time, this hit series is collected in print.

Matteo Ferrazzi is an Italo-Belgian writer who created Adventures of God more or less by accident, after a few years spent writing gags with no recurring characters. Fond of American pop culture from a young age, he was also introduced to Belgium's uniquely surreal tradition in cartoons and humor by his mother, and this influenced his work. He lives in Brussels, close to his parents and their dog. His previous experience in the entertainment industry includes a short-lived stint as a stand-up comedian.

Corey J. is a North Carolina based cartoonist who is currently working on Line Webtoon’s Adventures of God, a comedic slice of life series following the antics of God, Lucy, and their friends. The type of comics he enjoys making are the ones that follow the same cast of characters handling bizarre situations every week. If he’s not writing or drawing cartoons, you can find him running trails or traveling to new places in his home state.
Loading...
or support indie stores by buying on