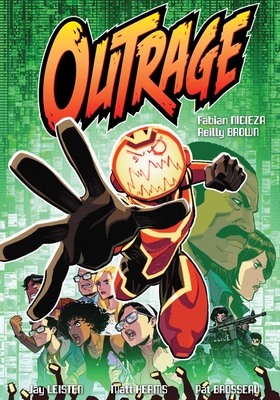 From Fabian Nicieza, the co-creator of Deadpool, and Reilly Brown, artist of the smash hit Batman/Fortnite comes OUTRAGE!

How many times have you wanted to reach through the Internet and strangle someone? Or, at the least, give `em a swift kick in the nuts? Yeah, everyone feels the same way. But… what if you could? Anonymously. Quickly. Violently. Would you…?

In a future only five minutes away…

Outrage is the story of a mysterious individual who can navigate the Internet and physically manifest at the source of the vile bile that spews throughout social media.

Along with an array of weaponry limited only by his imagination, Outrage can exact swift, merciless justice on anyone who triggers, humiliates, mortifies, stalks, hawks, balks or otherwise abuses someone on the Internet. And also, anyone who doesn’t know the difference between their, there and they’re.

But more importantly, Outrage is the story of trying to fight the anger inside the human soul.   Who is Outrage?

A virus is attacking people who abuse others on the internet. Comedic ass-kickings are occurring across the country by a sentient electronic entity that appears through the personal devices of bullies and babies alike. Who or what is OUTRAGE?

Fabian Nicieza is best known as a comic book writer for Marvel and DC, and as the co-creator of Deadpool.

He has also written X-Men, X-Force, New Warriors, Cable, Thunderbolts, and many more.

He developed the story world and created the characters for the 2021 animated series, Stan Lee’s Superhero Kindergarten.

New Jersey native Reilly Brown is a top selling comic artist and writer for DC comics, Marvel Comics and Line Webtoon.  He's known for bringing a sense of character and personality to the projects that he works on, balancing a combination of light-hearted humor, with fast paced superhero action. Best known for his work on several DEADPOOL titles, Reilly has also lent his talents to series such as Batman/Fortnite: Zero Point and AMAZING SPIDER-MAN among others, as well as creator-owned comics like POWER PLAY and OUTRAGE. Reilly currently lives in West Orange with his wife and two children.
Loading...
or support indie stores by buying on