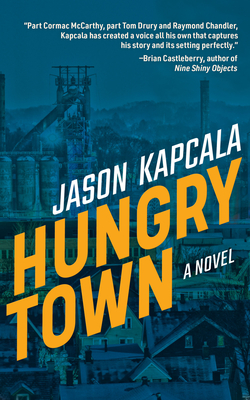 “A literary page-turner. . . . Part Cormac McCarthy, part Tom Drury and Raymond Chandler, Kapcala has created a voice all his own.” —Brian Castleberry

One October night in the depressed steel town of Lodi, Ohio, two police officers respond to a call about trespassers in the derelict Lodi Steel machine shop. A chase through the crumbling cathedral of steel columns launches a chain of events that will test the officers’ partnership and leave a boy to fend for himself in a decaying Rust Belt neighborhood choked by joblessness, boredom, and addiction.

On the opposite end of town, a young woman steps out of a rust-bucket Grand Marquis into an all-night diner. Instead of luggage, she carries mementos: an ankh tattoo she inked herself and a wallet-sized photograph of a boy who disappeared. She doesn’t realize her ex-boyfriend has hired two brothers to track her down and bring her back, by any means necessary.

The complex female leads of Hungry Town, with its sharp dialogue and poetic sensibility, turn classic noir and cop drama tropes on their heads. These morally complicated characters weave in and out of each other’s lives, sometimes violently, sometimes with surprising compassion.


Praise For Hungry Town: A Novel…

“With the grit of a western and the crackle of a murder mystery, this finely wrought effort delivers the goods.”
Publishers Weekly

“A literary flair lifts this above the routine procedural.”
Kirkus Reviews

“These flawed people, dealt a losing hand, will not soon be forgotten.”
Akron Beacon Journal

“A literary page-turner that lends poetry to the forgotten town at the heart of this powerful novel, filled to its borders with complicated, honest characters who will linger in your imagination long after the last page. Part Cormac McCarthy, part Tom Drury and Raymond Chandler, Kapcala has created a voice all his own that captures his story and its setting perfectly.”
Brian Castleberry, author of Nine Shiny Objects

“A fun read, firmly fixed in the detective/crime novel genre but with a nice literary eye for details.”
Mesha Maren, author of Sugar Run

Jason Kapcala is the author of the short story collection North to Lakeville. His writing has been nominated for numerous prizes, including the Pushcart Prize. He grew up in northeastern Pennsylvania, near the ruins of the Bethlehem Steel Works, and now lives in northern West Virginia.
Loading...
or support indie stores by buying on