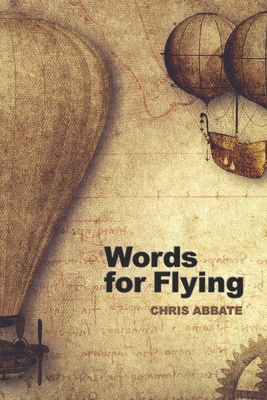 From stolen books to accidental uncles, from the contemplation of canines to the sensation of flying, Chris Abbate’s second collection of poetry explores life’s biggest questions through the lens of ordinary people, objects, and experiences. Brimming with curiosity, WORDS FOR FLYING navigates the transition from adolescence into adulthood and the unending quest for meaning. These poems straddle the spheres of innocence and experience and dive into a world of wonder where couches whisper their wisdom, fish inhabit the center of the universe, and grandfathers become gods. The poet Paul Hostovsky says, “Why do the best of Chris Abbate’s poems make me cry?... It’s because, as with any great music, beautiful singing can have that effect on us. And we wipe our eyes so that we may keep on reading.”

Praise For Words for Flying…

Why do the best of Chris Abbate’s poems make me cry? Could it be envy, because they’re so good they make me wish I’d written them? Could it be the sadness, vulnerability, and love mixed in with the playfulness of these poems? Or maybe their numinousness, which is also always somehow subtly part of the mix? Or is it simply that voice, finally, of “an ache of a boy,” its honesty, its accessibility, its tenderness, speaking a sort of “unspoken language of boys,” especially to those of us who most needed a voice like Abbate’s back in our own boyhoods, and still sorely need it today? It’s all these things. And it’s also because, as with any great music, beautiful singing can have that effect on us. And we wipe our eyes so that we may keep on reading.

Chris Abbate’s poems have appeared in numerous journals including Connecticut River Review, Cider Press Review, and Prime Number Magazine. He is a two-time nominee for a Pushcart Prize, has been nominated for a Best of the Net award, and has received awards in the Nazim Hikmet and North Carolina Poetry Society poetry contests. His latest book of poetry, Words for Flying, was published by FutureCycle Press. His first book of poetry, Talk About God, was published by Main Street Rag. (chrisabbate.com)
Loading...
or support indie stores by buying on