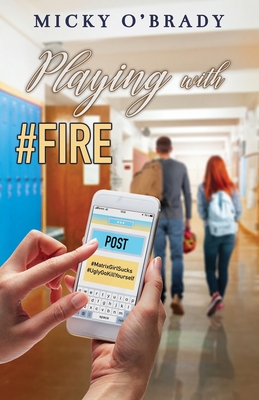 Seventeen-year-old Everly Aldaire was pretty lit on social media-until a bullying campaign led to her attempted suicide. A few months later, she's back at the very same school where everything began, only now she is #offline and not sure how to handle her life without posting or checking her feed.

Instead of giving her a break, though, fate throws her a curve ball when Everly has to participate in a health class challenge, picking up a new sport. Wouldn't be too bad, if she wasn't assigned the one sport nobody wanted: pro wrestling. #SRSLY?

Still traumatized by the bullying, Everly is expecting the worst of wrestling, but to her complete and utter surprise, it's not as bad as she thought. Granted, that could be because of the well-built and highly athletic seventeen-year-old superstud named Fire training her. Dressed and masked in a Lucha Libre outfit, Fire is as mysterious as he is confident, and he's the only one who really gets Everly. Fire and wrestling turn into her #safehaven, but when old bullies resurface and continue to play their sick games with Everly, it becomes clear something about Fire is not quite right. As Everly is struggling to keep her life under control, she is in for the #heelturn of the century, and the question becomes: who will need to #tapout first-the bullies or Everly?