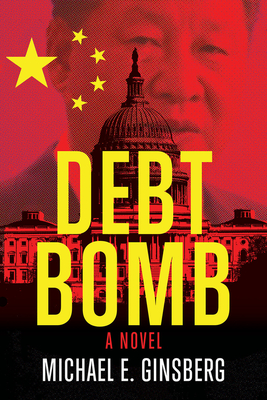 A political thriller, tied in to real events, about an apocalyptic threat to America that is ticking remorselessly in the background while Americans continue their daily routines, oblivious to the danger.

For years, China's spy agency has been watching the United States rack up trillions of dollars in debt, waiting for the right moment to weaponize that debt to collapse the American government and install a Communist puppet regime.

At the same time, suburban accountant Andrea Gartner has been an outspoken critic of the debt as a leader in the South Carolina state Republican Party.

When the United States elects President Earl Murray, he brings Andrea into his government as budget director to solve America's debt problem. But before the nameplate is even installed on her office door, China strikes, engineering an American debt crisis that brings the country to the brink of collapse. Government operations come to a screeching halt. With the American hegemon on its knees, China violently seizes the opportunity to fulfill its territorial ambitions in Taiwan and the South China Sea.

Thrust into the rapacious, cutthroat world of American politics and surrounded by crises on all sides, Andrea begins a desperate effort to save the United States. Arrayed against her are cynical politicians and belligerent military brass, some of whom just might be secret Chinese agents.

Will Andrea be able to keep the United States alive to fight another day? Or will America drown in a sea of red ink at the hands of the Chinese and see its democratic government replaced by a Chinese Communist puppet regime?

American life as we know it is about to be obliterated by a debt bomb. And the only person who can save the country is a suburban accountant.

Michael E. Ginsberg is an attorney in Washington, DC practicing in the field of national security law. He spent a decade in private practice at Arnold & Porter LLP in Washington, DC and then worked several years in the U.S. government as a Senior Associate General Counsel in the Office of the Director of National Intelligence (ODNI), where he served as legal counsel for the Intelligence Advanced Research Projects Activity (IARPA). He currently is Vice President and Deputy General Counsel at a Virginia-based defense contractor. This is his debut novel.
Loading...
or support indie stores by buying on