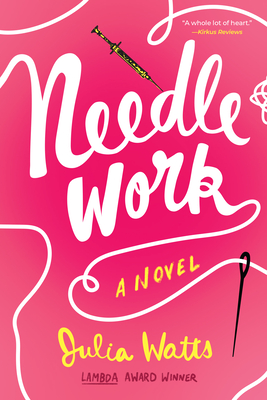 In rural Kentucky, a sixteen-year-old boy with a love of quilting, cooking and Dolly Parton helps his grandma care for his opioid-addicted mother, until the discovery of a family secret upends everything he has ever believed. While other sixteen-year-old boys in Morgan, Kentucky, love hunting and football, Kody prefers to spend his time quilting with his grandmother ("Nanny"), watching Golden Girls reruns, and listening to old Dolly Parton albums. Nanny is Kody's main caregiver, but it takes both Nanny and Kody to take care of Kody's mother, whose drug problem is spinning out of control. Between looking after Mommy and trying to survive in a place that doesn't look kindly on feminine boys, Kody already has a hard time making sense of his life. But then he uncovers a family secret that will change everything in his life.

Julia Watts is the author of fourteen novels and several short story collections in the genres of young adult fiction and lesbian fiction/erotica. Her books are set in her native Appalachia and often depict the lives of LGBTQ people in the Bible Belt. Her most recent novel, Needlework, was selected as Tennessee's youth selection for the "Great Reads from Great Places" list for the 2022 National Book Festival of the Library of Congress, and also won Honorable Mention for Best YA novel of the year in the Foreword INDIES awards.Her novel Finding H.F. (Alyson Press) won the Lambda Literary Award in the children/young adult category. Her novel, Quiver, set in rural Tennessee, received a rare "Perfect 10 Rating" from VOYA Magazine, and, along with several of her other novels, was selected for the American Library Association's Rainbow List. Her historical YA novel Secret City (Bella Books) was a finalist for the Lambda Literary Award and a winner of a Golden Crown Literary Award. In 2020 Watts was given the Tennessee Library Association's Intellectual Freedom Award. She lives in Knoxville and is working on a PhD in Children's and Young Adult Literature at The University of Tennessee.
Loading...
or support indie stores by buying on