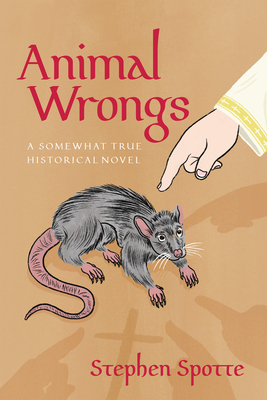 In a medieval French courtroom, animals are put on trial for crimes against mankind and must rely on preposterous legal diatribes by a court-appointed lawyer to defend them. Historical fiction has never been more uproarious as master storyteller Stephen Spotte unleashes this wild tale of opposing attorneys battling to defend or prosecute accused animals--including a rat and a pig--facing penalties of being hanged or burned alive at the stake. Based on actual court records, Spotte captures the wit and bluster of the era, where courtrooms were packed with cheering and heckling spectators in ever-more opaque, convoluted, and dilatory trials. By the end of this novel, Spotte uses his critically-acclaimed storytelling skills to explore still-relevant theories on legal precedent, the church vs. the state, mankind's place in nature, and animal rights. Fans of Umberto Eco, Edward Carey, and Amor Towles will devour ANIMAL WRONGS and its hilarious insights into pride, greed, and some of the most bizarre court trials in history.

Stephen Spotte, a marine scientist born and raised in West Virginia, is the author of 23 books including seven works of fiction and two memoirs. Spotte has also published more than 80 papers on marine biology, ocean chemistry and engineering, and aquaculture. His field research has encompassed the Canadian Arctic, Bering Sea, West Indies, Indo-West Pacific, Central America, and the Amazon basin of Ecuador and Brazil. ANIMAL WRONGS is his fifth novel. He lives in Longboat Key, Florida.
Loading...
or support indie stores by buying on