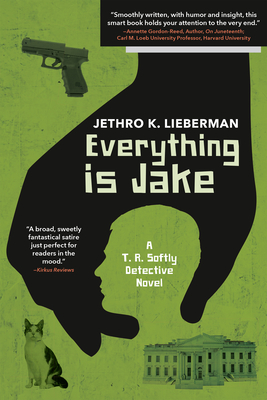 Meet intuitive & charming sleuth T. R. Softly, who must solve the case of a secret agency threatening to topple both the mafia & the US government--perfect for fans of Chris Hauty, David Baldacci, and Joseph Finder. A federal plea deal in Manhattan goes off the rails when a mob boss inexplicably recants his testimony days after voluntarily confessing to a lifetime of crime, and immediately, an FBI agent involved with the case goes missing. To find out what happened, the Feds call in T. R. Softly, detective fiction's newest and most intuitive sleuth. Softly's search takes him to Washington, D.C., where the "oddest of the forty-odd presidents of the United States" is suddenly laying plans to evaporate the U.S. government, as assassination rumors percolate in dark corners. Co-opted into partnering with a secret government agency, Softly struggles to understand how many games are being played and by whom. Is he master of his fate or has he been the unwitting agent of friends and foe? A twisting, rollicking tale that enthralls readers until the last page.

Jethro K. Lieberman is the author, co-author, or editor of more than 30 books and has had a long and varied career in law, journalism, and legal education. His many books include The Litigious Society and The Enduring Constitution, both awarded the Silver Gavel, the American Bar Association's top literary prize. He holds a B.A. from Yale, a J.D. from Harvard Law School, and a Ph.D. in political science from Columbia. Everything Is Jake is Lieberman's solo fiction debut. He lives with his wife Jo Shifrin in Bethesda, Maryland.
Loading...
or support indie stores by buying on