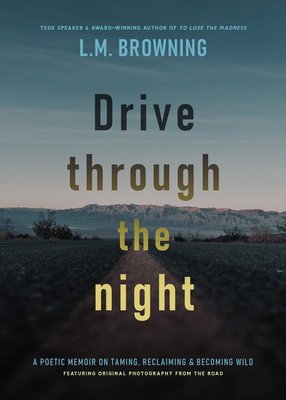 Drive Through the Night

Following the release of her micro-memoir, To Lose the Madness, and the TEDx Talk at Yale University based on her life, Browning returns from a six-year poetic silence with, Drive through the Night.
Raw, gritty, lonesome, and stunningly authentic--we pick up Browning's trail at mid-life as the poet reflects on her journey through her major relationships, both with lovers and self.
The map of these poems traces the poet's journey of overcoming and re-becoming while simultaneously set against the iconic backdrop of the American Southwest. In her words, "These poems and ponderings were written across the nights--while traveling the distance between who I was expected to become and who I authentically (irrevocably) am."
In Drive Through the Night, we follow the trail of an orphan-turned-vagabond who left behind the white picket fence for the open range and open road.

(L.M.) Leslie M. Browning is a TEDx speaker, publisher, and the award-winning author of twelve titles. She grew up in the small fishing village of Stonington, Connecticut. In her writing, Browning explores the confluence of the natural landscape and the interior landscape. She holds degrees from the University of London and Harvard University. Over the last ten years of her career, she has served on the Board of the Independent Book Publisher's Association and is a Fellow with the International League of Conservation Writers. In 2011, she founded Homebound Publications and its divisions, which has gone on to become a leading independent publisher in the country. She currently serves on the State of Connecticut's Suicide Advisory Board and CT-NAMI's Lived Experience Committee. A vagabond-turned-homesteader, Les is currently posted up at Homebound Publications' woodland basecamp in the Berkshire Mountains of Massachusetts where she is solo homesteading 15-acres of raw land, in her own modern Walden.
Loading...
or support indie stores by buying on