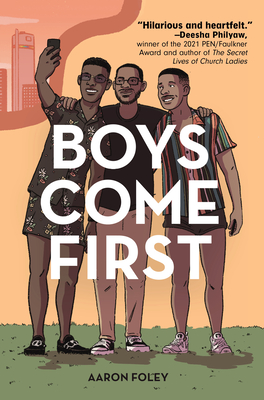 This hilarious, touching debut novel by Aaron Foley, author of How to Live in Detroit Without Being a Jackass, follows three Black gay millennial men looking for love, friendship, and professional success in the Motor City.

Suddenly jobless and single after a devastating layoff and a breakup with his cheating ex, advertising copywriter Dominick Gibson flees his life in Hell's Kitchen to try and get back on track in his hometown of Detroit. He's got one objective -- exit the shallow dating pool ASAP and get married by thirty-five -- and the deadline's approaching fast.

Meanwhile, Dom's best friend, Troy Clements, an idealistic teacher who never left Michigan, finds himself at odds with all the men in his life: a troubled boyfriend he's desperate to hold onto, a perpetually dissatisfied father, and his other friend, Remy Patton. Remy, a rags-to-riches real estate agent known as "Mr. Detroit," has his own problems -- namely choosing between making it work with a long-distance lover or settling for a local Mr. Right Now who's not quite Mr. Right. And when a high-stakes real estate deal threatens to blow up his friendship with Troy, the three men have to figure out how to navigate the pitfalls of friendship and a city that seems to be changing overnight.

Full of unforgettable characters, Boys Come First is about the trials and tribulations of real friendship, but also about the highlights and hiccups --late nights at the wine bar, awkward Grindr hookups, workplace microaggressions, situationships, frenemies, family drama, and of course, the group chat -- that define Black, gay, millennial life in today's Detroit.

Aaron Foley's reporting and writing on Detroit, blackness, and queerness has appeared in This American Life, Jalopnik, the Atlantic, CNN, several anthologies, and the PBS NewsHour, where he is currently a senior digital editor. A Detroit native, the city's first appointed chief storyteller, and a former magazine editor, he is the author of How to Live in Detroit Without Being a Jackass and editor of The Detroit Neighborhood Guidebook. He currently lives in Brooklyn's Bedford-Stuyvesant neighborhood.
Loading...
or support indie stores by buying on