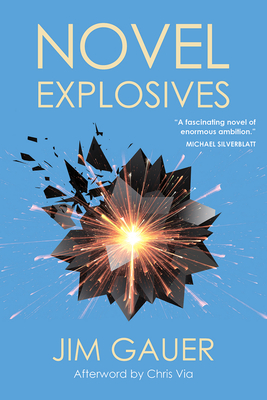 Jim Gauer, Chris Via (Afterword by)

It's an otherwise ordinary week in April, the week after Easter, 2009. Late in the week, a man wakes up in Guanajuato, Mexico with his knowledge intact, but with no memory of who he is, or how he came to live in Guanajuato. Early in the week, a venture capitalist sits at his desk in an office tower in Los Angeles, attempting to complete his business memoirs, but troubled by the fact that a recent deal appears to be some sort of money-laundering scheme. And in the middle of the week, just before dawn on April 15, two gunmen arrive at an El Paso motel to retrieve a duffel bag stuffed full of currency, and eliminate the man who brought it to El Paso. Thus begins the three-stranded narrative of Novel Explosives, a fiendishly funny search for identity that travels through the worlds of venture finance, the Juarez drug wars, and the latest innovations in thermobaric weaponry, a joyride of a novel with only one catch: the deeper into the book you go, the more dangerous it gets. At the palpitating heart of the novel, at its roiling fundamental core, lies an agonizing reappraisal of the way the U.S behaves in the world, a project that grows more urgent by the day.

"An amazing novel...the most fun reading I've had in ages" —Steven Moore, author of The Novel: An Alternative History and many other books of criticism

Jim Gauer is a mathematician, published poet, and Venture Capitalist. Chris Via is a computer scientist and widely published literary critic. He also has a literary book review YouTube show, "Leaf by Leaf," with a rapidly growing audience.
Loading...
or support indie stores by buying on