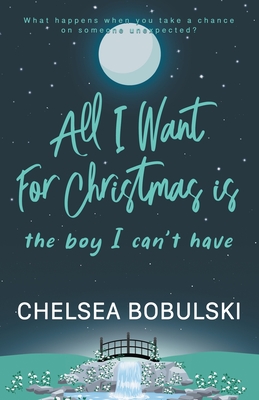 All I Want For Christmas is the Boy I Can't Have

A YA Holiday Romance

The holiday season continues in this captivating third novel in Chelsea Bobulski's All I Want for Christmas young-adult contemporary romance series.

What happens when you take a chance on someone unexpected?

Isla Riddle has been obsessed with True Love for as long as she can remember. Books, TV, movies-if it's a story about star-crossed lovers, ill-fated love, or love conquering all, Isla has read it, seen it, and talked nonstop about it. She's also dedicated her life to it by helping her mom build up Riddle's Bridal Boutique and Wedding Planning, a business they started together after her dad left town ... and they've just received their biggest break yet: a high society bride with a million-dollar budget.

August Harker doesn't have to think much about his life-it's already been planned for him. He has the parent-approved heiress girlfriend, the 4.0 GPA at an elite college preparatory school, and over a dozen lacrosse and debate team trophies. He has no reason to think his life won't turn out just like his dad's, which is exactly why he isn't into planning weddings, parties, or any other event where hundreds of his father's closest clients and legal associates discuss affidavits, jurisprudence, and all the things that make his father the most sought-after criminal defense attorney along the Eastern seaboard. It only reminds August that he'll be discussing the same things with the same people in ten years' time between glasses of champagne and unfortunate run-ins with the electric slide. However, planning a wedding is exactly where he finds himself as his older sister prepares to walk down the aisle.

As Isla works with August behind-the-scenes, she becomes more and more convinced that he's the one: the soulmate she's been waiting for. August feels it, too, that rightness of being with Isla, and as August hears Isla talk about dreams like they're real possessions that can be achieved, he dares to hope for another future entirely, one in which he can become what he's always wanted to be.

But can their love-and August's newly-resurrected dreams-survive the layers of expectations and ambitions that have been placed upon him?