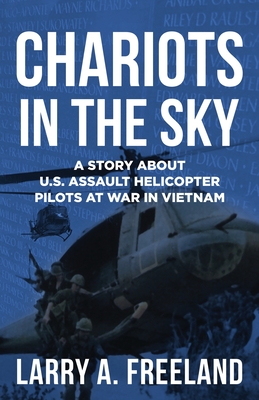 Chariots in the Sky

Chariots in the Sky is the story of Captain Taylor St. James, a dedicated Army helicopter pilot, who is sent to Vietnam. While performing his duties, Taylor will be challenged and tested beyond any measure he could have ever envisioned.

He is assigned to the Eagles, a Huey Assault Company with the 101st Airborne Division in I Corps. Their flying exploits take them into many familiar places to include: A Shau Valley, Khe Sanh, Quang Tri Province, Hue, DMZ, North Vietnam and Laos.

Along the way, Taylor participated in Lam Son 719, the last major American Offensive Operation of the war. This historical campaign lasted for sixty days and involved over 750 helicopters flying in and out of Laos, supporting the South Vietnamese incursion into Laos. Lam Son 719 was the costliest period of helicopter warfare for the Americans. More helicopters were shot down and sustained battle damage than any other period during the Vietnam War.