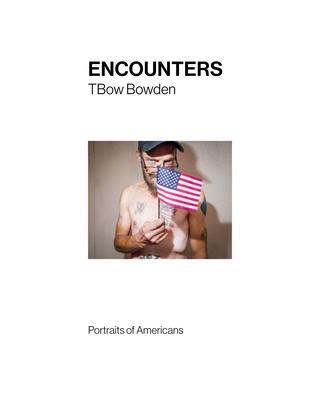 Using his camera as a passport, Encounters is Tom Bowden's (known as TBow) portrait diary of human life in America. Known for his inimitable style, TBow somehow turns potentially unwilling subjects into compliant participants in his portrait making. Encounters is a unique look at people, documented through the lens of an ambitious observer of the human condition. In her essay in the book, the renowned documentary photographer Maggie Steber writes: "Nowadays, much of street photography is detached. Not TBow's. He is a visual minstrel and troubadour. People are comfortable with him and they reveal their stories." Interspersed throughout the book are short texts that tell stories about some of his subjects. For the portrait of "Scott with His Pistol, Austin Texas, 2016," TBow writes: "This photograph was made the day 'open carry' was legalized in Texas. I asked Scott what he thought about gun control and he told me, "Gun control is knowing where your gun is pointed at all times."

Tom ( TBow ) Bowden's love of street photography began in his early teens and continued in college while studying photojournalism and working at a local NBC Television Station. When he was 15, TBow saw the Diane Arbus "Child with Toy Hand Grenade" photograph in a High School Library Book. After that, there was never any doubt. He was obsessed. TBow's work as a photographer and producer have taken him around the world. His latest work can be viewed on his Website, Instagram and Facebook. He currently resides in Texas with several feral rescue cats. TBow says, "Wherever I go, whatever city I'm in, I head toward the streets. That's where the commotion is, that's where the people are and that's where the images wait like presents."
Loading...
or support indie stores by buying on