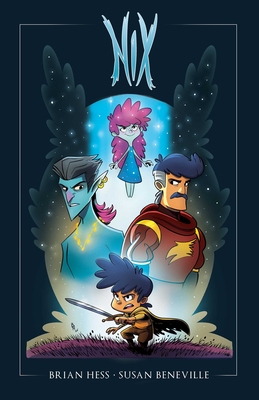 Classic fantasy adventure with a cartoon like art style for quick, light reading.

A feisty girl trapped in spirit form, Nix, must convince a self-doubting young prince, William, to embrace his powers before her vengeful father destroys the kingdom they both love.  Now the ancient enemy of William's family has reappeared and now it is up to the two of them to stop the Wyvern and heal the land.

Brian Hess is an illustrator and animator from San Francisco.  He has worked on multiple independent animated films and within the mobile game industry for such companies as Zynga, Digital Chocolate, Mindsnacks and TinyCo, as well as drawing the official licensed comic Miraculous based on the hit animated series.

Susan Beneville is an indie comic writer and screenwriter living in Oakland, California. Her current all-ages graphic novel, Nix, was co-created with artist Brian Hess.  Her first all-ages graphic novel Awake is about a young girl and her brother who have the power to wake and talk to planets that are in trouble. Susan is currently working on a new YA fantasy/coming-of-age project, Sanya & The Blue, and an edgier espionage/adventure series called Highwater.
Loading...
or support indie stores by buying on
(This book is on backorder)