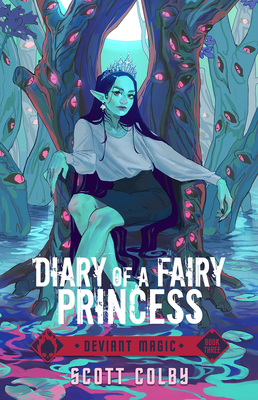 Yo. Crown Princess Myrindi of Talvayne here. This is the story of my life so far. It's an inspirational, uplifting tale that won't leave a dry eye in the house. The film adaptation's going to bring home seven Academy Awards and inspire at least twice as many hot new looks for spring. Ah, who am I kidding? My life kind of sucks. I spent my childhood stuck in the palace with a bunch of dimwitted sycophants who think khakis are a good idea. I'm doomed to die a gruesome death during childbirth so my daughter can inherit the magic that protects my city. My father, the king, essentially jumpstarted a military coup by trying to sell my hand in marriage–and thus the throne–to the highest bidder. Let's just say the runner up got his knickers in a bit of a twist. Now I'm on the run with a crew of mouth-breathing weirdos who may not have my best interests at heart, hiding out in janitor's closets and public restrooms and kitschy suburban homes and all sorts of places that make me wish I could bathe in bleach. I haven't had a decent mani-pedi in days. But you know what? This is my f'ing city and those coup jerks can't have the place.

Frustrated with the generic, paint-by-numbers state of modern fantasy writing, Scott Colby is working hard to give the genre the kick in the pants it so desperately needs. Shouldn't stories about people and creatures with the power to magically change the world around them be creative, funny, and kind of weird? Scott thinks so.
Loading...
or support indie stores by buying on