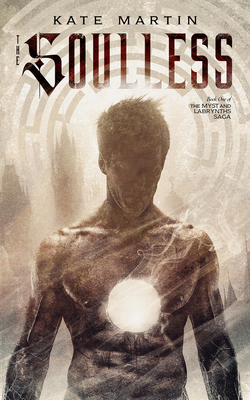 The Soulless (The Myst and Labrynths Saga #1)

There's a vacancy in Haven. The One High God has gone missing, sending those in power to cover up the sudden silence. Doubters fall from grace. Insurgents and the despondent rip out their own hearts, turning to Hell for solace in a new, uncertain world. A human drinks from the discarded heart of a seraph and taints mortal blood with witchcraft. After three thousand years, the world stands at a precipice. Falling is inevitable. Brishen, plagued by visions of a dark and painful future, sells his soul at a young age to a demon to escape death. Ushered into the care of Alec, the demon's most trusted and oldest soulless, Brishen finds some semblance of protection from the seraph who hunt him for what he sees. Alec is exhausted after two thousand years of servitude, but finds redemption in Brishen—as well as a reminder of those he failed to save. Brewing in the pits of Hell, the mother of all demons concocts a plan to put a demon god on the throne of Haven. Procuring a powerful witch mad enough to test the limits of body and spellwork, she sets a dangerous plan in motion, making Alec and Brishen realize there are more monsters hunting them than their pasts.

Kate Martin lives in Connecticut with her husband, two daughters, and one disagreeable cat. She grew up writing and watching anime, while dancing and reading every fantasy book she could find. She’s authored numerous short stories and novels, all of which deal with the fantastical and elements of the unknown. You can find her over on Instagram @katemartinauthor
Loading...
or support indie stores by buying on