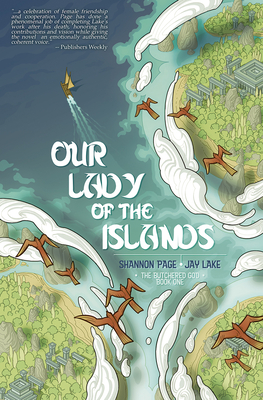 Our Lady of the Islands (The Butchered God #1)

Set in the lush and dangerous world of Jay Lake's Green, Our Lady of the Islands is a vibrant, enchanting tale of political intrigue and divine mystery. "Our Lady, heal us..." Sian Katte is a successful middle-aged businesswoman in the tropical island nation of Alizar. Her life seems comfortable and well-arranged...until a violent encounter one evening leaves her with an unwanted magical power. Arian des Chances is the wife of Alizar's ruler, with vast wealth and political influence. Yet for all her resources, she can only watch helplessly as her son draws nearer to death. When crisis thrusts these two women together, they learn some surprising truths: about themselves, their loved ones, and Alizar itself. Because beneath a seemingly calm facade, Alizar's people—and a dead god—are stirring...

Praise For Our Lady of the Islands (The Butchered God #1)…

"... a celebration of female friendship and cooperation. Page has done a phenomenal job of completing Lake's work after his death, honoring his contributions and vision while giving the novel an emotionally authentic, coherent voice." —Publishers Weekly


"A powerful, thoughtful tale that stays with you long after you turn the final page." —Jim C. Hines, Hugo-winning author of Libriomancer

"Page and Lake's voices blend perfectly, with her eye for character and his eye for setting." —Ken Scholes, author of the Psalms of Isaak saga


"A gorgeous tale of courage and friendship, with appealing characters and an epic sweep." —Tina Connolly, author of Ironskin

Shannon Page was born on Halloween night and spent her early years on a back-to-the-land commune in northern California. A childhood without television gave her a great love of the written word. At seven, she wrote her first book, an illustrated adventure starring her cat Cleo. Sadly, that story is out of print, but her work has appeared in Clarkesworld, Interzone, Fantasy, Black Static, Tor.com, the Proceedings of the 2002 International Oral History Association Congress, and many anthologies, including the Australian Shadows Award-winning Grants Pass, and The Mammoth Book of Dieselpunk. She also regularly publishes articles and personal essays on Medium.com, including the widely read “I Was a Trophy Wife.” Books include The Queen and The Tower, first book in The Nightcraft Quartet; Eel River; the collection Eastlick and Other Stories; Orcas Intrigue, Orcas Intruder, and Orcas Investigation, the first three books in the cozy mystery series The Chameleon Chronicles, in collaboration with Karen G. Berry under the pen name Laura Gayle; and Our Lady of the Islands, co-written with the late Jay Lake. Our Lady received starred reviews from Publishers Weekly and Library Journal, was named one of Publishers Weekly’s Best Books of 2014, and was a finalist for the Endeavour Award. Forthcoming books include A Sword in the Sun (Nightcraft book 2); a sequel to Our Lady; and more Orcas mysteries. Edited books include the anthology Witches, Stitches & Bitches and the essay collection The Usual Path to Publication. Shannon is a longtime yoga practitioner, has no tattoos (but she did recently get a television), and lives on lovely, remote Orcas Island, Washington, with her husband, author and illustrator Mark Ferrari. Visit her at www.shannonpage.net. Jay Lake lived in Portland, Oregon, where he worked on multiple writing and editing projects. His 2007 book Mainspring received a starred review in Booklist. His short fiction appeared regularly in literary and genre markets worldwide. Jay won the John W. Campbell Award for Best New Writer, Endeavour Award, and was a multiple nominee for the Hugo and World Fantasy Awards.
Loading...
or
Not Currently Available for Direct Purchase