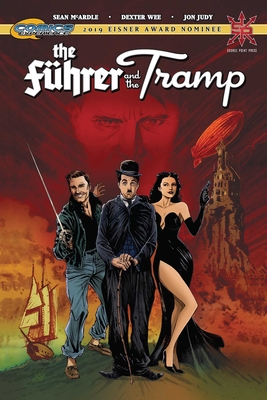 The Fuhrer and the Tramp

Fictional retelling of the making of the Great Dictator by Charlie Chaplin as a direct conflict with Hitler.

Charlie Chaplin - comic, filmmaker, and raconteur - didn't become the world's biggest star by courting controversy, but when he comes face-to-face with the horrors of Hitler, he feels compelled to get off the sidelines and get involved. And then Charlie is approached by FDR himself with a special assignment that will send Chaplin across the globe and bring him face-to-face with the Fuhrer himself!

Sean McArdle is an Eisner nominated comics creator, as well as a filmmaker and a college professor at Kent State University. Over the past decade he’s worked for a diverse array of publishers, including Image Comics, IDW, and Arcana Studio.   He is currently working with Führer and the Tramp artist Dexter Wee on a multi-generational Werewolf epic entitled Wolves of Babylon, a World War I Lovecraftian horror comic with Shawn Coss, and his long gestating personal bio-comic, Sonic Euthanasia.
Loading...
or support indie stores by buying on