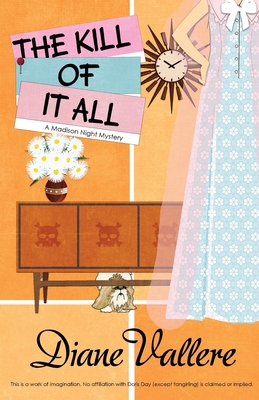 The Kill of It All

A diva found dead on a commercial set. A decorator tasked to take her place. Can she remember her lines before the killer erases her too?

Madison Night's star is on the rise. Thanks to a series of TV spots to promote her decorating business's grand reopening, she's busier than ever. The police commissioner, impressed with her screen presence, engages her to replace the original actress in his feel-good campaign for local law enforcement. But when the first spokeswoman's body is found on set after Madison's testimonial airs, the last thing the police need is publicity.

Madison steers clear of the controversy by focusing on her company relaunch, but when gossip links the victim to someone special in her life, she gets involved by proxy. She uses her soapbox to draw out suspects, but if she's not careful, it might serve as a coffin instead.

Can Madison reveal a hidden killer before the bubble bursts on her newfound success?

﻿THE KILL OF IT ALL is the ninth mystery in the unique Madison Night series. If you like characters with a passion for their business, Doris Day movies, or smart sleuthing, you'll love Diane Vallere's fun, frothy book.