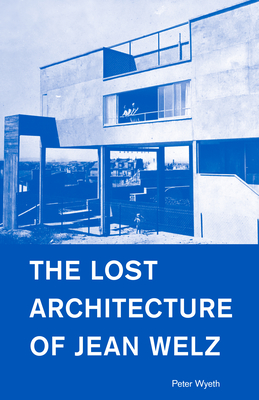 The Lost Architecture of Jean Welz

A deserted Paris house holds the mystery of the brilliant Viennese modernist Jean Welz who worked alongside Le Corbusier and Adolf Loos. His story has never been told until now.

A leading painter still highly regarded in South Africa, Jean Welz was an economic emigre from Europe on the eve of WWII. His prior architectural career has been virtually unknown until a string of discoveries unfolded for author and filmmaker Peter Wyeth over eight years, allowing him to narrate this amazing true tale of genius.

Born in 1900 and trained in ultra-sophisticated, but conservative Vienna, Welz was sent to Paris for the 1925 Art Deco exhibition by his influential employer, renowned architect Josef Hoffmann. There he met preeminent modern architects Le Corbusier and Adolf Loos. The latter employed him to assist in building a house for the founder of Dada, Tristan Tzara. They all mixed in avant-garde circles at the Cafe du Dome in Montparnasse along with Welz's classmate from Vienna, later Chicago-based architect Gabriel Guevrekian; Welz's future employer Raymond Fischer, whose archive was mostly destroyed by Nazis; and photographer Andr Kert sz.

Through Welz's South African family archive, author Wyeth retrieves stories, letters, portfolios, and photographs generations after Welz's death that unravel his heroic designs, his stunning built critique of Corbusier's "Five Points of Architecture," a gravestone for Marx's daughter, and the many ways that Welz disappeared amongst his collaborators, intentionally and not.

This account of why Jean Welz did not become a famous name in architecture takes us through his brother's Nazi-dealings, illness, betrayal, self-destruction, Apartheid, and an uncompromising artist's vision at the same time sifting through significant, literally-concrete evidence of Welz's built projects and visionary designs.

Author Peter Wyeth has been making films since the 1970s, including several with the Arts Council of Great Britain, one of which about a modernist block of flats in London, inspired by Hokusai ("12 Views of Kensal House") was runner-up for best documentary. He started a forgotten film-mag North by North West, and in 1994 directed "The Diary of Arthur Crew Inman," based on the 17-million-word and longest diary in America and named a London Times "Film of the Week." From 1999-2003, Wyeth was head of the film school at University of the Arts London, where he taught for ten years and set up the student-run channel Xplore.tv. His short film "Pane" won a Turner Classic Movies award in 2003. His book The Matter of Vision: Effective Neurobiology and Cinema was published by Indiana University Press in 2015 (in the UK by John Libbey Media) and over the past twelve years he has written dozens of articles on architecture and design for The Modernist. He continues to direct, including for television. He has three children and a grandson, and lives in London and Paris with his wife, whom he married in the glorious Town Hall of the 19th arrondissement of Paris: a stone's throw from Jean Welz's Maison Zilveli.
Loading...
or support indie stores by buying on
(This book is on backorder)