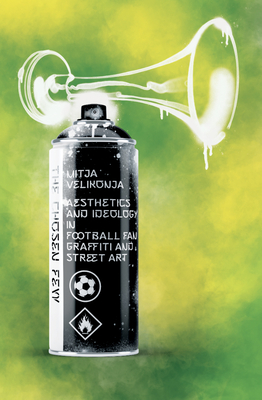 Aesthetics and Ideology in Football Fan Graffiti and Street Art

Just a game? This intriguing visual title looks deep into the underbelly of football (soccer) fandom, featuring a vast photographic archive of fans' graffiti and street art captured by a pioneering 'graffitologist'. A thoughtful meditation on the intersection of street culture and sport.

On the fringe of sports culture are the Ultras, the football fans whose pyrotechnics, chants, wildly creative stunts, and hooliganism are infamous. Using selections from his archive containing hundreds of photographs of Ultras' street art and graffiti, including everything from elaborate murals to stickers to "scratchitto" incisions and spray-paint duels, award-winning author Mitja Velikonja introduces readers to the visual iconography of a fascinating underworld.

The Ultra subculture is built by "no-bodys," the anonymous (primarily) men whose attachments to their teams, specifically in Europe and post-socialist states, sometimes cross the lines into nationalist sentiments and militaristic "Blood and Soil" extremism. After examining general themes and trends in street art and tifo club graffiti, Velikonja embarks on a case study of fans from his native Slovenia and touches on the roles of neighboring football fans in the Balkan Wars. As he peels back layers of misinformation and misrepresentation, he cues our understanding of factional mindsets within histories of political instability, arguing for dissensus being a critical element to democracies. Always under siege, the fans require nothing less than fidelity and devotion, but precisely to what is anyone's game to call.

Dr. Mitja Velikonja is a Professor for Cultural Studies and head of Center for Cultural and Religious Studies at University of Ljubljana, Slovenia. Main areas of his research include contemporary Central-European and Balkan political ideologies, subcultures and graffiti culture, collective memory and post-socialist nostalgia. His monographs include Rock'n'Retro - New Yugoslavism in Contemporary Slovenian Music (Sophia, 2013), Titostalgia - A Study of Nostalgia for Josip Broz (Peace Institute, Ljubljana, 2008), Eurosis - A Critique of the New Eurocentrism (Peace Institute, Ljubljana, 2005) and Religious Separation and Political Intolerance in Bosnia-Herzegovina (TAMU Press, 2003). He is co-author of the book Celestial Yugoslavia: Interaction of Political Mythologies and Popular Culture (XX vek, 2012), and co-editor and co-author of books Post-Yugoslavia - New Cultural and Political Perspectives (Palgrave, 2014) and Yugoslavia From A Historical Perspective (HCHR, 2017). He was a full-time visiting professor at Jagiellonian University in Krakow (2002 and 2003), at Columbia University in New York (2009 and 2014), at University of Rijeka (2015), at New York Institute in St. Petersburg (2015 and 2016), at Yale University (2020), Fulbright visiting researcher in Philadelphia (2004/2005), and visiting researcher at The Netherlands Institute of Advanced Studies (2012) and at the Remarque Institute of the New York University (2018). For his achievements he received four national and one international award (Erasmus EuroMedia Award by European Society for Education and Communication, 2008). His last monograph Post-Socialist Political Graffiti in the Balkans and Central Europe (Routledge, 2020) was awarded as one of the most important scientific achievements of University of Ljubljana for the year 2020.
Loading...
or support indie stores by buying on