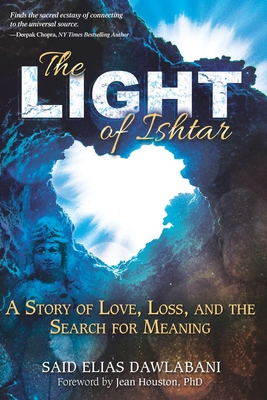 The Light of Ishtar

A Story of Love, Loss, and the Search for Meaning

An ancient goddess in the light of a contemporary love story . . .Ishtar is the Mesopotamian goddess of love and war. Like the Greek Persephone, she descends to the Underworld and can return to Earth only after great hardship. Her story is that of the universal patterns of feminine power that transcend the dual nature of existence, balancing life and death and the forces that perpetuate the cycles of our universe. Today, this archetype represents the resurrection of the power of the feminine that for centuries has been absent from our human story. Said Dawlabani's poignant memoir, The Light of Ishtar, draws parallels between the ancient goddess and his wife and soulmate, Elza Maalouf, recognizing inner energies that are universal to us all.

For over a decade, the dazzling futurist Elza Malouf spearheaded the resurrection of feminine power in the Middle East. A passionate agent of transformation, she championed women's rights everywhere. With Don Beck, leader of the Spiral Dynamics theory of human evolution, she and Said cofounded the Center for Human Emergence Middle East. She is author of the award-winning book Emerge The Rise of Functional Democracy and the Future of the Middle East. And Said, applying values systems to large-scale change, became an eminent speaker and author as well. Brilliant and dynamic, this Lebanese American couple seemed destined for greatness on the world stage―until in 2014 disaster struck.

With excerpts from Elza's own unpublished memoir, Said tells the story of their backgrounds in Lebanon and their early romance in the States. He draws on Joseph Campbell's hero's journey to chronicle their ascent to prominence in their respective fields as part of their mythic call to adventure. Then with rare courage he explores the dark side of the psyche when, at age forty-nine, Elza begins descending into speechless dementia. Ishtar's journey to the Underworld mirrors them both as Said battles with the dark forces within himself and within the medical community, trying to restore Elza to health. But, unlike the goddess, Elza can't return to live in the world as she once did.

In telling the story, Said explores the patterns at the heart of transformational experience: the deep wounding, the grief, and the long road to acceptance, recognizing that a life dedicated to improving the human condition does not rise above caring for one human being.

Reframing his and Elza's experience through Ishtar's powerful myth provides a compelling example of how we can all lead richer and extraordinary lives. Said's spiritual observations elevate perception to a place of universal awareness. He demonstrates how myth, wonder, and mystery are constantly around us if we transcend the physical lens through which we usually interpret life. On the far side of such transcendence is the true meaning of love that goes beyond time and space. Said shows how a union of two souls represents the greater search for the beloved and how the coming together of the feminine and the masculine mirrors a universe in harmony. At the end, he can take solace in the simple pleasures that still remain, as he and Elza sit companionably in their garden by the sea.