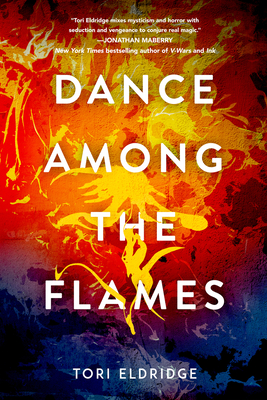 Dance Among the Flames


From the national bestselling author of the Lily Wong thriller series comes a “stunningly original” (F. Paul Wilson) dark journey into Brazilian mysticism about a desperate mother who rises from the slums to embrace Quimbanda magic amid her quest for the ultimate revenge. Across forty years, three continents, and a past incident in 1560 France, Serafina Olegario tests the boundaries of love, power, and corruption as she fights to escape her life of poverty and abuse.


Serafina's quest begins in Brazil when she's possessed by the warrior goddess Yansã, who emboldens her to fight yet threatens to consume her spirit. Fueled by power and enticed by Exú, an immortal trickster and intermediary to the gods, Serafina turns to the seductive magic of Quimbanda. It’s dangerous to dance in the fire. But when you come from nothing, you have nothing to lose.

Praise For Dance Among the Flames…

"Tautly written, mystical, and action-packed Dance Among the Flames will take you on a wild, thrilling ride through centuries and continents. Eldridge is at the top of her game, delivering an irresistibly sweeping adventure that will linger long after the gripping story ends. Don't miss it!"  —Lisa Unger, New York Times bestselling author of Last Girl Ghosted


"With Dance Among the Flames, Tori Eldridge looks for light and hope in the darkest corners of the human heart. She mixes mysticism and horror with seduction and vengeance to conjure real magic."  —Jonathan Maberry, New York Times bestselling author of V-Wars and Ink

"With Dance Among the Flames, Tori Eldridge gifts us with a tale as dark as the holds of the Portuguese slave ships that carried the Yoruba gods from Africa to the New World. A stunningly original novel that breaks new ground with every shocking turn."  —F. Paul Wilson, New York Times bestselling author of The Keep

"Tori Eldridge's Dance Among the Flames is a mesmerizing blend of ancient dark magic and horrors both mystical and man-made. It was compelling, disturbing, beautifully crafted...in other words, I loved it!" —Lisa Morton, six-time Bram Stoker Award winner

"Eldridge wields her darkest magic yet in this sensual and richly layered novel of poverty, privilege, and power. Vibrant and brutal, Dance Among the Flames is a cultural triumph."  —Lee Murray, Bram Stoker Award-winning author of Grotesque: Monster Stories

"Compulsively readable, with prose so smooth and evocative the pages fly by."  —Tim Waggoner, Bram Stoker Award-winning author of Writing in the Dark

"The cost of justice is high in Dance Among the Flames, born in the fire of Tori Eldridge's radiant imagination. The journey begins in a Brazilian favela where characters are transformed by the need for hope. They discover power can flood through a body, allowing them to become more than human. I thoroughly enjoyed this glorious adventure!"  —Linda D. Addison, award-winning author, HWA Lifetime Achievement Award recipient and SFPA Grand Master

"Dance Among the Flames is a fascinating page-turner of a novel, rich with details yet written with a lushly sparse elegance that manages to immerse the reader in the story, settings and characters without sacrificing pace or action. A winner!"  —Dana Fredsti, author of Blood Ink and the Ashley Parker series

"Beautiful, gripping read! The storyline of Tori Eldridge's Dance Among the Flames is so incredibly strong, the voice so unique and clear, the character development so rich, that I did not want to put this book down... or end. The chilling suspense of Stephen King's Carrie meets the near-autobiographical cultural saturation of Alex Haley's Roots. Powerful on so many levels."  —Sandra Brannan, author of the Liv Bergen Mystery/Thriller Series

"Fueled by the power of a warrior goddess, Dance Among the Flames is a rich story of sacrifice and strength. It's full of spirit, magic and the energy of the gods."  —Cynthia Pelayo, Bram Stoker Award nominated poet and author of Children of Chicago

Tori Eldridge is the national bestselling author and Anthony, Lefty, and Macavity Awards finalist of the Lily Wong mystery thriller series—The Ninja Daughter, The Ninja's Blade, and The Ninja Betrayed. Her shorter works appear in the inaugural reboot of Weird Tales magazine and horror, dystopian, and other literary anthologies. Her horror screenplay The Gift—which inspired Dance Among the Flames—earned a semi-finalist spot for the Academy Nicholl Fellowship.

Before writing, Tori performed as an actress, singer, dancer on Broadway, television, and film, and earned a 5th degree black belt in To-Shin Do ninja martial arts. She is of Hawaiian, Chinese, Norwegian descent and was born and raised in Honolulu where she graduated from Punahou School with classmate Barack Obama. Tori's deep interest in world culture and religions has prompted her to visit nine countries, including Brazil.