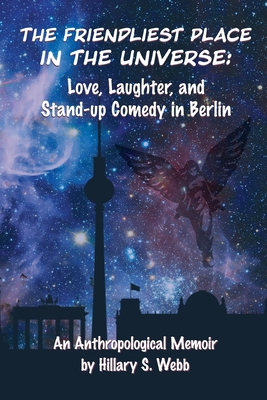 The Friendliest Place in the Universe

Dismayed by the divisiveness of the Trump/Brexit era, anthropologist Hillary S. Webb began to fear that the better angels of our nature had deserted us entirely-if they had ever existed at all. In the Fall of 2017, Webb traveled to Berlin, Germany, for a week's vacation. There, she found renewed hope in an unlikely place: Cosmic Comedy, an international stand-up venue described as "The Friendliest Comedy Club in Europe." Down in that dark, beer-soaked basement, Webb watched with awe as the club's eccentric-but-lovable co-promoters, Dharmander Singh and Neil Numb, gathered a group of culturally and demographically diverse comedians and audience members, transforming them over the course of an evening from strangers into allies through laughter. Convinced that Cosmic Comedy offered a model of togetherness that could help heal the divisions between us, Webb returned to Berlin a few months later with the intent of uncovering the club's recipe for what is known in humanistic anthropology as communitas or "collective joy." As with all journeys of the mind and heart, Webb's investigations revealed more than she bargained for, including the unwelcome realization that collective joy has a dark side and that she, herself, was as susceptible to its intoxicating influence as anyone else. The result is a humorous, hopeful examination of the nature of human togetherness.