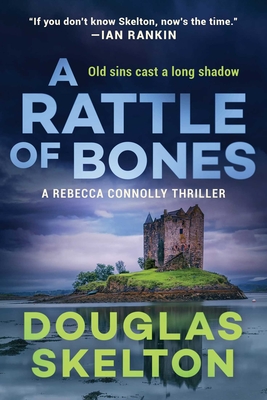 A Rattle of Bones

Old sins cast a long shadow in this unrelenting thriller by the author of Thunder Bay.

When banners proclaiming the innocence of James Stewart spring up at the gravesite of his famous namesake—a clan leader who was falsely accused of murder and hanged almost three hundred years ago in a miscarriage of justice that still resonates—investigative reporter Rebecca Connolly smells a story.

The publicity stunt was clearly meant to draw attention, but what’s behind it and why now? The young Stewart has been in prison for ten years for the brutal murder of his lover, lawyer and politician Murdo Maxwell, in his home in Appin, near the site of the Stewart monument. Rebecca soon discovers that, prior to his murder, Maxwell believed he was being followed, and his phones were tapped. What would justify a government phone tap against a public figure? And why is a Glasgow crime boss so interested? As Rebecca keeps digging, she finds herself in the sights of Inverness crime matriarch Mo Burke, who wants payback for the damage caused to her family in a previous case.

Set against the stunning backdrop of the Scottish Highlands, A Rattle of Bones is a tale of injustice and mystery, and the enduring echo of the past in the present.

Praise For A Rattle of Bones: A Rebecca Connolly Thriller…

Praise for Douglas Skelton and A Rattle of Bones, longlisted for Bloody Scotland's McIlvanney Prize:
"If you don't know Skelton, now's the time."—Ian Rankin
“A master of his craft.”—Scots Whay Hae
“Among Scotland's top cadre of crime writers.”—Scotsman
"Outstanding . . . Once again, Skelton carefully draws together the many plot strands in this rewarding slow-burner, rich in both characters and landscapes. Skelton remains a writer to watch."—Publishers Weekly, starred review
"An intriguing Highland mystery peopled with quirky characters and peppered with wit."—Times Crime Club, Pick of the Week
"A compelling thriller, laced with dark humour."—Sunday Post
"A cracking good read."—Crime Fiction Lover
"Packed with mystery and suspense . . . [but] the real draw for me is how Skelton expresses his characters. He clearly has a path he is building, and their growth feels natural."—Geek Girl Authority
"Simply superb, and you simply must read it. . . . [Skelton has] absolutely hit the bullseye here with a character-driven gem I know I want to reread over and over."—crimebookgirl
"This is Tartan Noir at its best: and a book we'd highly recommend."—Undiscovered Scotland
"Amongst my best books of the year . . . Beautifully written, very atmospheric, weaving Scottish history in with the criminal underworld of today."—simplysizereviews

“Did Roddy kill his girlfriend, Mhairi? . . . On the way to figuring this out, there are a lot of deep, dark—and I mean dark—secrets that are uncovered. . . . Almost everyone on this island is hiding something terrible. . . . It's the type of crime fiction that Irish and Scottish writers do particularly well.”—Inside Flap

"A surprisingly gripping read. I had no idea where things were going to end up, . . . Skelton’s characters kept bucking expectations as they tried to stick to Stoirm’s 'ethical' code. . . . Readers looking for something out of the ordinary and atmospheric might like this one."—A Bookish Type

"Razor sharp . . . An outstanding piece of crime fiction. Not to be missed."—Denzil Meyrick, author of the Detective Daley thrillers

"A gripping and thrilling read from one of the great Scottish crime writers, themes of crime, mystery, secrecy and loyalty all woven together to make Thunder Bay one of those books that will stay with you long after you’ve turned the last page."—Kate Noble, The Quiet Knitter

"While the action keeps coming like blood from a severed artery, Skelton show us the souls of his characters. . . . A stand-out thriller."—Scots Magazine

“It would be so easy to romp through The Blood Is Still—the plot is compelling and the characters are so darn realistic, but I advise you to hold fire and take time to savour some of the gorgeously lyrical prose that’s sitting there in among all of the drama.”—Crime Fiction Lover

“Once again great characters, we hear more from reporter, Rebecca Connolly and the tension just keeps you on your toes all the way through. It’s also full of Douglas Skelton humour too which just makes it a marvellous read!”—Independent Book Reviews

"IIt's a triumph. I absolutely loved it, and everyone should read it!."—SimplySuzeReviews

"Skelton's years as the editor of a local newspaper make for an intrinsic, pitch-black depiction of the competition between the police, the press, and the powers-that-be in the scramble to construct and control narratives. . . Suspenseful."—Dundee Courier, Scottish Book of the Week

"Absolutely unmissable . . . A compelling read with characters you care about and a layered, intelligent plot that captures both the heart and the mind."—LiveandDeadly.net

“Incorporating concerns about the spread of populism and the downsizing of news reporting, Skelton’s intriguing premise keeps you reading avidly to see how he’s going to tie it all together and make it work.”—Herald

Douglas Skelton was born in Glasgow. He has been a bank clerk, tax officer, taxi driver (for two days), wine waiter (for two hours), journalist, and investigator of real-life crime for Glasgow solicitors. He has written eleven true crime and Scottish criminal history books but now concentrates on fiction. His novels Open Wounds and Thunder Bay, the first Rebecca Connolly thriller, were longlisted for the McIlvanney Prize for best crime book of the year. He lives in southwest Scotland.
Loading...
or support indie stores by buying on