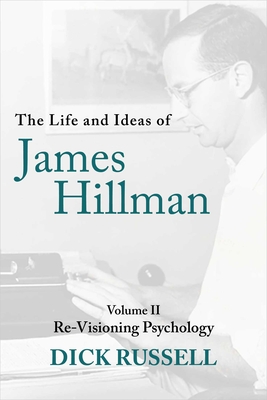 James Hillman, who died in 2011 at the age of eighty-five, has been described by poet Robert Bly as “the most lively and original psychologist” of the twentieth century.  Based on author Dick Russell’s interviews with Hillman and dozens of people who knew him, Volume Two of The Life and Ideas of James Hillman takes up Hillman’s mid-life when he set about returning psychology to its Soul-rich roots in Greek mythology and Renaissance esotericism.

From his base teaching at Zurich’s Jung Institute, we follow Hillman’s growing international prominence as a maverick in the field, coinciding with his relationship and eventual marriage to Patricia Berry.  They would be instrumental in formulating Archetypal Psychology, along with a group of young compatriots in what became known as Spring House.

The new ideas taking shape moved psychology away from the dominant scientific/medical model with its focus on treating the isolated individual, expanding into the fertile realm of culture and the imagination.  Amid prodigious writings and lectures, Hillman made mythology and even alchemy relevant to our times.

Delivering the prestigious Terry Lectures at Yale and being nominated for a Pulitzer Prize, Hillman returned to America after living primarily in Europe for thirty years.  To the surprise of many, he settled in Dallas and helped found an Institute of Humanities and Culture while taking up how to re-imagine city planning.

Equally surprising was Hillman’s subsequent move to rural Connecticut, where he and Pat Berry resided in a nineteenth-century farmhouse.  Starting in the mid-’80s, Hillman became a pioneering teacher in the mythopoetic men’s movement alongside Robert Bly and Michael Meade—where deep talk about fathers and sons and male-female relationships offered a new kind of group therapy, a cultural therapy.

As Thomas Moore said of Hillman, he possessed a “genius for taking any theme and shedding serious fresh light on it.”  Along the way, Hillman’s insights came to encompass all of the arts, a “poetic basis of mind” that connected him to many of the most influential artists and thinkers of the modern era.