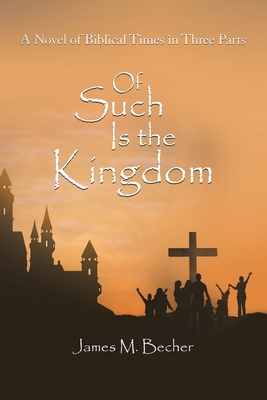 Of Such Is the Kingdom

A Novel of Biblical Times in Three Parts

Travel to ancient Palestine at the time of Jesus and the Roman Empire, and ask: What could a cynical, nonconformist, dry-goods salesman, a disgruntled blacksmith, and a musing mendicant all have in common? The answer: Down deep, they all want something better. The nonconformist, Manaheem, Herod's truth-seeking foster brother, is hired by Herod to foment an insurrection against Pontius Pilate. Manaheem recruits the blacksmith, Barabbas, to lead the insurrection - much to the dismay of Barabbas's Godly but fearful wife. The mendicant, an unfortunate but pensive young man named Timotheus, joins with an older beggar unsympathetic to his musings. Pontius Pilate sees himself as a weak ruler, but his wife pushes him to take over Herod's territory. Meanwhile, Manaheem reunites with his former wife, Claressa, and after much soul searching, tries to blackmail Herod, losing Claressa in the process. Barabbas turns to robbery, enlisting the aid of the two beggars. Timotheus hesitates and almost turns back, but then decides to go along. Does redemption lie ahead, and at what cost to those who find it? Find out in this incredible tale filled with conflict, suspicion, and treachery.

James M. Becher was born in Lancaster, Pennsylvania. He graduated from Clearwater Christian College with a bachelor's. degree in Bible-literature, and Biblical Seminary in Hatfield, Pennsylvania, with a M.Div. Becher was ordained in November 1974 and met his wife, Berenice, from Venezuela, while serving in a foreign student ministry in St.Petersburg, Florida. He is also the author of Impossible Journey, The Christmas Victory, and the non-fiction book, Principles of the Kingdom. which has illustrations from this book.
Loading...
or
Not Currently Available for Direct Purchase