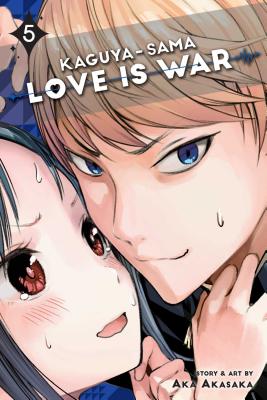 Will Kaguya and Miyuki find a way to see each other sooner rather than later over summer vacation? And is tweeting really an effective way to communicate with your crush? Then, Kaguya’s overprotective staff try to prevent her from going to the fireworks festival with the rest of the student council. Miyuki and Kaguya both try to find a way to enroll in the same elective class. And someone tries to celebrate someone else’s birthday with style!

Some people believe the stars determine your compatibility.

Aka Akasaka got his start as an assistant to Jinsei Kataoka and Kazuma Kondou, the creators of Deadman Wonderland. His first serialized manga was an adaptation of the light novel series Sayonara Piano Sonata, published by Kadokawa in 2011. Kaguya-sama: Love Is War began serialization in Miracle Jump in 2015 but was later moved to Weekly Young Jump in 2016 due to its popularity.
Loading...
or
Not Currently Available for Direct Purchase