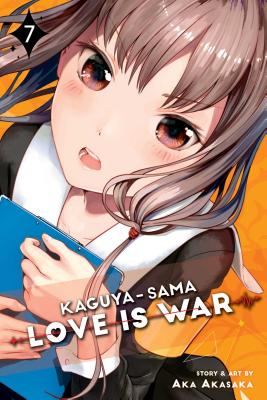 Will Miyuki get reelected as student council president? Is newcomer Miko Ino going to be serious competition…or a school laughingstock? Then, Kaguya and Miyuki draw each other in art class (results may vary). Yu wants to do the right thing. Miyuki catches up on sleep, which has an unexpected effect on his attractiveness to women—especially Kaguya. And Kaguya anxiously awaits a certain invitation.

Does underwear make the man?

Aka Akasaka got his start as an assistant to Jinsei Kataoka and Kazuma Kondou, the creators of Deadman Wonderland. His first serialized manga was an adaptation of the light novel series Sayonara Piano Sonata, published by Kadokawa in 2011. Kaguya-sama: Love Is War began serialization in Miracle Jump in 2015 but was later moved to Weekly Young Jump in 2016 due to its popularity.
Loading...
or support indie stores by buying on