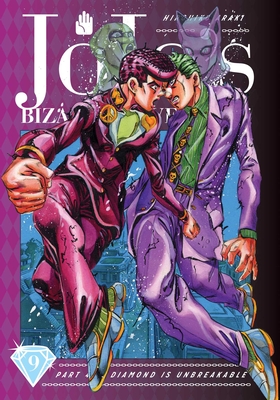 A multigenerational tale of the heroic Joestar family and their never-ending battle against evil!

Diamond is unbreakable! Josuke, Koichi, Okuyasu, Jotaro, Rohan and their newfound friends have been searching Morioh for any trace of the serial killer and Stand user Yoshikage Kira. After much effort and many battles against enemy Stands, they’ve found their prey! But does Kira have the upper hand after all? This is it! Witness the final battle of Yoshikage Kira and Josuke Higashikata, as Deadly Queen and Shining Diamond go head-to-head!

Hirohiko Araki made his manga debut in 1981 with the Wild West story Busô Poker. He experimented with several genres, including mystery (Mashonen B.T.) and action-horror (Baoh), before beginning JoJo’s Bizarre Adventure in 1986. Propelled by imaginative storylines, weird imagery and individualistic artwork, JoJo’s Bizarre Adventure is one of the longest-running and most popular shonen manga ever. Araki’s current works include a new series set in the JoJo universe, JoJolion.
Loading...
or support indie stores by buying on
(This book is on backorder)