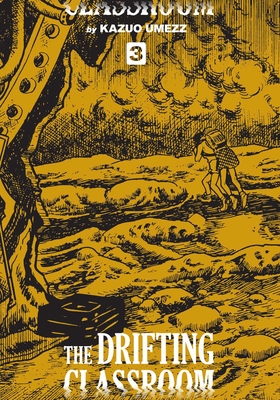 The definitive edition, featuring an all-new translation and deluxe hardcover design that reestablish Kazuo Umezz’s The Drifting Classroom as a timeless horror classic.

In the aftermath of a massive earthquake, a Japanese elementary school is transported into a hostile world where the students and teachers are besieged by terrifying creatures and beset by madness.

After a disastrous journey to the wasteland beyond the school, Sho and the rest of the surviving students return to their fortress, only to discover an even deadlier danger waiting for them. Former friends must fight a final battle as Kazuo Umezz's horror classic careens toward an epic conclusion!

Kazuo Umezz started drawing professionally in the 1950s and is considered the most influential horror manga artist ever. His many horror and sci-fi/horror works include Cat Eyed Boy (1967-1968), Orochi, The Drifting Classroom (1972-1974), Ultraman (a manga adaptation of the TV series), Senrei (Baptism), My Name is Shingo, The Left Hand of God/Right Hand of the Devil, and Fourteen. His popular gag series Makoto-Chan (1976) and Again prove that Umezz is also an accomplished humor cartoonist. Umezz's weird style, incredible ideas and sometimes terrifying imagery have made him a fixture of Japanese pop culture, and his work has been adapted into movies, anime and collectibles.
Loading...
or support indie stores by buying on