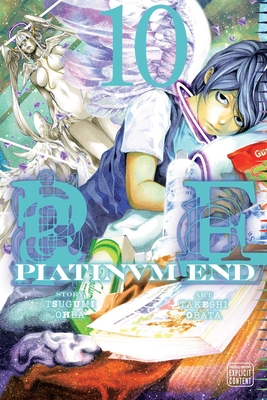 Thanks to Susumu’s TV announcement, the whole world now knows about the existence of the god candidates. Mirai and his friends find themselves being targeted by all kinds of government agencies. Their safety hinges on the ability to locate the remaining hidden candidates and put an end to the process. But the mysterious final god candidate might have their own dark plans…

Born in Tokyo, Tsugumi Ohba is the author of the hit series Death Note, Bakuman and Platinum End.

Takeshi Obata was born in 1969 in Niigata, Japan, and first achieved international recognition as the artist of the wildly popular Shonen Jump title Hikaru no Go, which won the 2003 Tezuka Osamu Cultural Prize: Shinsei “New Hope” Award and the 2000 Shogakukan Manga Award. He went on to illustrate the smash hit Death Note as well as the hugely successful manga Bakuman and All You Need Is Kill.
Loading...
or support indie stores by buying on