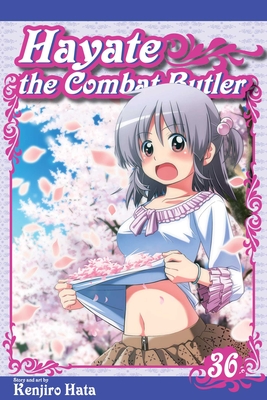 A hilarious tale of butlers, love and battles!

Since the tender age of nine, Hayate Ayasaki has busted his behind at various part-time jobs to support his degenerate gambler parents. And how do they repay their son’s selfless generosity? By selling his organs to the yakuza to cover their debts! But fate throws Hayate a bone…sort of. Now the butler of a wealthy young lady, Hayate can finally pay back his debts, and it’ll only take him 40 years to do it.

Ruka has thrown down the gauntlet! By confessing her feelings for Hayate and going in for a lip-lock, the idol singer turned manga artist puts our hero in danger of actually getting a girlfriend. To stop this unacceptable slackening of romantic tension, Nagi makes an offer Ruka can’t refuse. Now Hayate’s fate rests on the outcome of a manga-drawing competition between the two aspiring artists. Does Hayate have any say on which girl he ends up with? Ha ha, of course not.

Without ever receiving any kind of manga award, Kenjiro Hata's first series Umi no Yuusha Lifesavers was published in Shonen Sunday Super. Hayate the Combat Butler is currently serialized in Weekly Shonen Sunday.
Loading...
or support indie stores by buying on